Zamane, a Moroccan newspaper, has made a rare reference to the mass conversion of the Jews of Fez in the 13th century. It is a little known episode in the history of Morocco. (With thanks: Michelle) 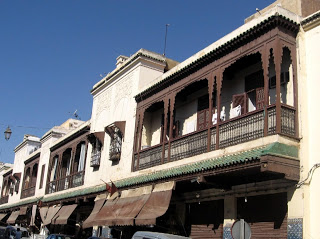 Jewish homes with their distinctive balconies in the Mellah of Fez

An official of the French protectorate who was involved in collecting testimony on behalf of  Mohamed V in 1953, tells how the Jews of Fez, the “Muhajirin” had to convert to Islam, giving rise to great Fassi families that are thought to have always been Muslim.One Marcel Vallat stumbled on  an old  manuscript recounting this episode. The unknown author describes an event itself little known in the history of Morocco. The text tells how, in fact, in the thirteenth century, many Fez Jews  converted to Islam. They abandoned their faith after a great massacre that decimated part of their community in Fez and opened the way to a mass conversion to Islam.

The document was part of  a collection, or Mejmoue, belonging to an old Alawite from Rabat, Moulay Abderrahmane, better known under the name “Moulay El Kebir”.

Vallat translated the title “History of Muhajirs”, the word for citizens today. The manuscript was due to be offered to Mohammed Ben Abderrahman, Sultan Mohammed IV (1859-1873) who was the father of Moulay Hassan, the future Hassan I (1873- 1894). The document dates from the second half of the nineteenth century. After the death of  Hassan I it fell into the hands of the famous “Moulay El Kebir” who had agreed to lend it to the young Vallat.

The Arabic text is archived in the Royal Library. It was studied first by the Fqih El Manouni and medievalist historian by Mohamed Fatha (this scholarly analysis was published by Bouregreg  in 2004).

As for Marcel Vallat, he went  back to France after Morocco became independent in 1956 and withdrew completely from public life, cutting all ties with Morocco, where he had made virtually  his entire administrative career.