Mimoune Oumelaid, the Moroccan whom I’ve written about before his trip to Israel, is in Israel now, and has so far written eight articles about his experience.

Oumelaid, who appears to be Muslim, has been seeing lots of Moroccan Jews on his trip who have been showing him around.

Today he mentions that he didn’t tell his mother about the trip, and finally he called her from a bus in Jerusalem as he was on his way to look at the significant collection of Moroccan books and papers at Israel’s National Library.

On my way to the National Library of Israel, I thought of calling my mother, and telling her where I was. On the last time I called, the plane was about to take off from Mohammed V airport in Casablanca towards Paris. I told her I was going outside the country, without saying Israel.

“Mom, if I do not call you after two or three days, do not worry, only a matter of time and circumstances.” Then the call ended. I am going to Israel, and if I told her that, I would increase [my diabetic mom’s] blood sugar.

On the bus I called her and told her that I was in Jerusalem. She asked me in fear if I was safe from bullets.

I assure her that I am in the city of peace, where the minarets, churches and temples converge, and that everyone lives next to everyone in safety here in Jerusalem, at least here and now.

“But I see in television every day the exchange of fire, the dead and the wounded,” says my mother, and I felt she was crying for fear of me.

The bus was equipped with Wifi, and next to each seat was a place to charge the phone, so I ran my phone camera and showed her the streets of the city where there is no war and no exchange of fire.

“Look, there is no exchange of fire, no children stoning, no war, it may be somewhere else, but here, the world is pure and the sky is clear.”

I showed her the sights through the window and the streets of the city on the way to Kiryat Edmund and I described the buildings of the city, its gardens, basements, great infrastructure, and people, and swear to her that I am in complete security.

I tell her about what I have seen here. I assure her every time that the city is very safe and that the war, if ever, has ended at least here. I did not hang up until the bus stopped near the Israeli National Library.

Oumelaid attended a workshop on Jews from Arab countries, and met professors and scholars of Moroccan origin.

Many Jews of Moroccan origin were found inside the library. They were there for an educational workshop in “Al-Arabiya al-Yahud” with a university professor born in Fez.

I do not know if this workshop is repeated periodically, in this library, but many Moroccan Jews attended, and came to learn and read Moroccan proverbs and ancient poems written by their ancestors in Morocco about the Jews and their situation.

Mr. Ahmed, who speaks Arabic fluently, tells us about the contents of this library and its history. He said that the library dates back to 1892 and contains more than 5 million books, 100,000 Arabic, Persian and Turkish volumes on the Middle East and 200,000 volumes on Islam. Literature and the study of the Middle East, and 3 thousand manuscripts in Arabic, and 8 reading rooms.

Here is a photo of a hand-written miniature Koran from the 10th century that is among the many Muslim artifacts preserved in the library of the Jewish state. 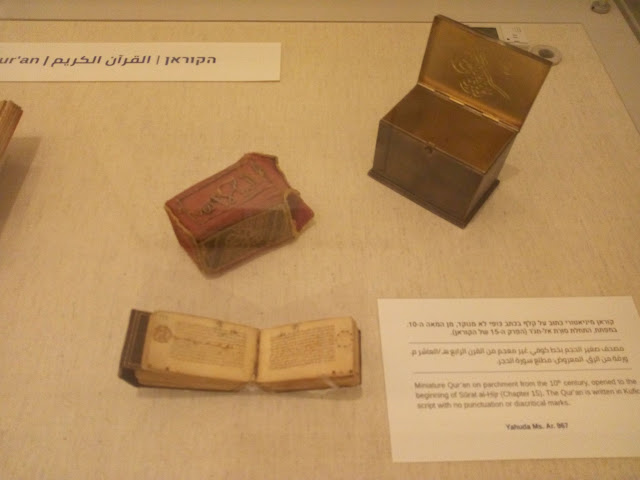