Ron Unz is a former businessman, failed politician and now publisher of an anti-Israel website, The Unz review.

His latest article shows that he is also an unabashed antisemite.

This 7800 word article includes the most absurd lies about Jews and Judaism, mostly taken from the writings of antisemite Israel Shahak.

Unz claims that “The enslavement or extermination of all non-Jews seems an ultimate implied goal of the religion.”

He writes that under Jewish law, “Jewish lives have infinite value, and non-Jewish ones none at all.”

Unz goes on: “religious Jews apparently pray to Satan almost as readily as they pray to God, and depending upon the various rabbinical schools, the particular rituals and sacrifices they practice may be aimed at enlisting the support of the one or the other.”

And: “Indeed, many deeply religious Jews utter a prayer each and every day for the immediate extermination of all Christians.”

Of course the Jews hide all of this from Gentiles: “If the Gentile population became aware of these Jewish religious beliefs and the behaviors they promote, major problems for Jews might develop, so an elaborate methodology of subterfuge, concealment, and dissimulation has come into being over the many centuries to minimize this possibility, especially including the mistranslation of sacred texts or the complete exclusion of crucial sections.”

Even more: “Naziism could best be described as ‘Judaism for Wimps’ or perhaps Judaism as practiced by Mother Teresa of Calcutta.”

Every one of these are blatant antisemitic lies.

Unz, unsurprisingly, also is quoted approvingly by and donates to a number of anti-Israel personalities and organizations. Here are the recipients of his money in 2012, including Mondoweiss and Norman Finkelstein: 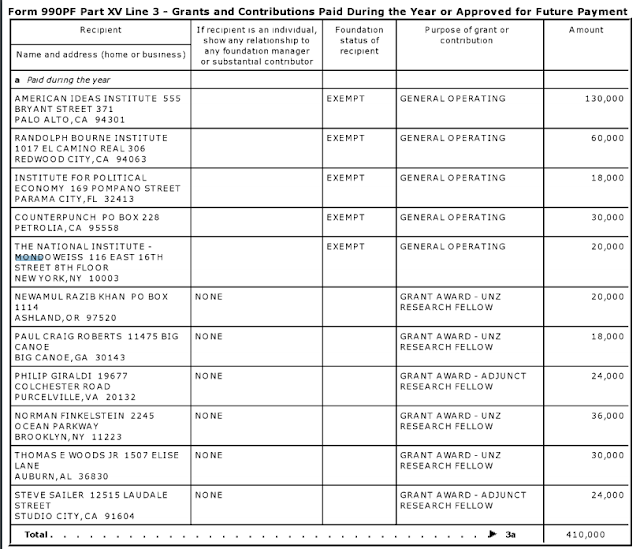 Unz has paid anti-Israel site Mondoweiss at least $80,000 over the years.

Mondoweiss has returned the favor by linking to Unz’ writings on a number of occasions.

The ADL in 2014 said that “Though Unz does not appear to be an anti-Semite, he provides support to extreme anti-Israel ideologues and his writings resonate with and are regularly cited by anti-Semites.”

This evaluation must be changed, and Unz’ crazed hate for Jews and Judaism must be exposed.