Peter Garcia-Webb has apparently been a friend of Baroness Tonge since their respective medical training at Guy’s Hospital.

Now living in Perth, Western Australia, the distinguished research scientist, London-born of Jewish parentage, is a derider of Israel, posting this on Facebook, for example, at the time of Bibi’s highly successful visit to Australia early last year, when the recently deposed Malcolm Turnbull was prime minister: 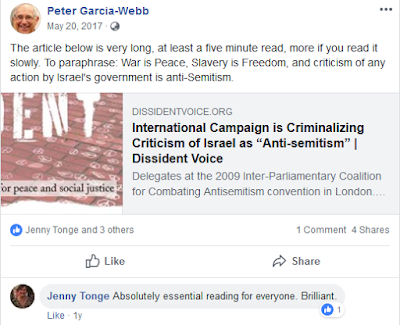 In fact, he dislikes the latter so much that he’s now written a long screed of his own about the definition of antisemitism:

Which is very much liked by Baroness Tonge: 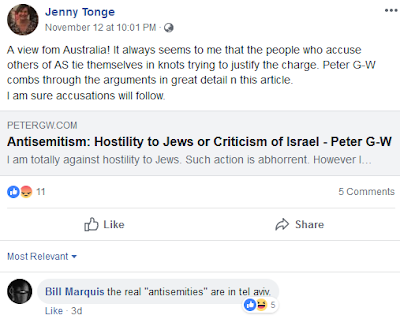 As I showed here, the talented Garcia-Webb’s forays into “social fiction” make no secret of his antipathy to Zionism.

But that aside, some of his tweets have been eyebrow-raising:

Not as grossly startling, granted, as these social media sentiments (brought to public attention by Aussie Dave in his post here), by one of Tonge’s Facebook friends, anti-Israel activist and “human rights”lawyer Simone O’Broin (aka Simone Burns).  The same woman whose drunken racist and sexist abuse of Air India cabin staff has gone viral on the internet (interesting take by David Collier here): 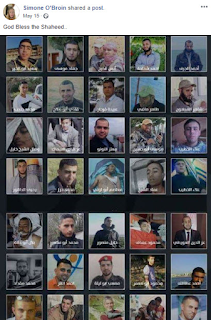 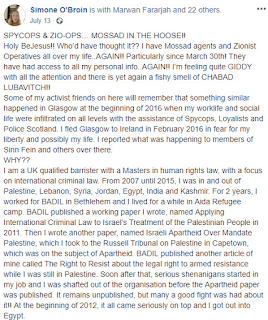 As has been widely observed, O’Broin’s rant provides a stark reminder of the slime that lurks within the anti-Israel movement.

Here’s the ghastly Pamela Hardiment aka Pam Arnold, for instance:

I wonder how Milady and her cobber Down Under would define that!