The eviction last week of the Arab Shamasneh family from a house in Jerusalem’s Shimon Hatzaddik quarter has raised a global chorus of disapproval from media, diplomats and human rights activists. Israelis are being painted as heartless creatures who throw elderly Arabs out on the street. But are we being told the full facts? Lyn Julius writes in The Jewish Chronicle: 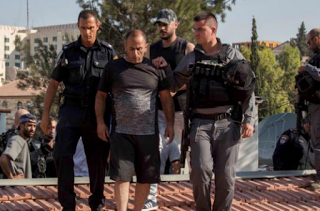 Members off the Shamasneh family being forcibly evicted

The Jewish Hubara family owned the house but were expelled early in the 1948 War of Independence. The properties were impounded by the Jordanian Custodian for Absentee Property who rented them to local Arabs.

When the Israelis recaptured and annexed East Jerusalem in 1967, it became possible for the former Jewish owners to apply for compensation or restitution. Legal cases have dragged on for years, however, because the Israeli courts have protected the Arab tenants’ rights. Only if the residents do not pay rent has judgment gone against them. The courts have been known not to enforce an eviction order against Arab squatters with no other home to go to.

Few media mention the expulsion of 1948. The Jewish claimants, they say, want to “Judaise” Jerusalem – “to throw out the Arabs and expand Jewish settlement”. Fewer still have reported that the Shamasnehs did not pay rent.

Ten years ago, the Hubaras sold their property rights on to Aryeh King of the Israel Land Fund. King told Haaretz that the Arab family ceased paying rent five years ago. “I don’t trust them anymore because they have a debt of 180,000 shekels for rent, and damage of another 160,000 shekels…They did everything possible so [the eviction] would happen.”

He added: “The elderly parents have no reason whatsoever to remain in the street because their daughter lives right next door, and there is evidence they will receive housing aid from the European Union.”

Reports also allege a double standard, that the law allows Jews to reclaim their property but no such law exists for Palestinians. While restitution is rare, anyone can claim compensation for property lost within the Green Line.

In 1993, 14,692 Arabs claimed compensation under Israel’s Absentee Property Law. In 2016 Gulf News Palestine reported on a campaign to prevent increasing numbers of landowners from accepting compensation for property inside the Green Line because it jeopardised the Palestinian “Right of Return”.

The real double standard is that the media never find dispossessed Jews worthy of coverage. No Israelis driven from their homes can initiate court proceedings in Arab lands, let alone obtain compensation.