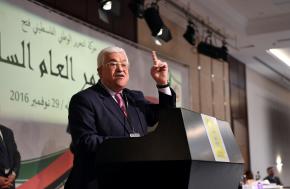 Mahmoud Abbas gave a three-hour speech to the Fatah conference on Wednesday, where he had the chance to lay out his vision of both the past and the future.

He said nothing new.

But it is still instructive to reiterate what he did say, and what he always says, because the media studiously ignores his actual words and hypocrisy and pretends that only the “peaceful” parts are what is important.

I already elaborated on his specifying the worst terrorist leaders in history as being “martyrs.”  Here are some other lowlights:

“I hope that the next conference will be on the Holy city of Jerusalem, the capital of the state of Palestine, which has been in the past, and it will remain so forever and ever.”

When was it ever the capital of “Palestine”?

“The convening of this conference, seven years after the sixth conference, which was held in the city of Bethlehem, is a personification of our convictions and our commitment to guard them, it, and to preserve the democratic process of our movement.”

There is nothing democratic about the conference. Abbas quashed any opposition, expelled troublemakers from Fatah and didn’t allow them to attend.

“Fatah, which was launched in 1965 as a leading movement of Palestinian national liberation after the catastrophe of 1948…”

Fatah was founded in 1959, possibly earlier. 1965 was its first terror attack. It speaks volumes that the peaceful president considers that the real birth of the organization.

Abbas paid tribute to Ahmed Shukairy, the first leader of the PLO, whose original 1964 charter explicitly denied any claims over Gaza and the West Bank while Egypt and Jordan controlled them.

Abbas reiterated and bragged yet again that he has not changed the political position of the PLO one iota since 1988 – even before Oslo. No concessions in 1993, or 2001, or ever, for peace with Israel.

Abbas said Oslo was important, though, because it allowed the Palestinian leadership to return from abroad and it gave them some measure of sovereignty, although not enough, “it is a step forward, we still see steps forward, liberation of the country and access to independence is the accumulation of steps brick by brick by brick by brick, step by step.” This is entirely consistent with Arafat’s plan to destroy Israel in stages.

He mentioned Israel’s relinquishing of the Sinai and Gaza as examples of how he expects to gain a nation. Which means that Abbas agrees that Gaza isn’t occupied.

Abbas said “I am against the so-called Arab Spring,” calling it an Arab version of Sykes-Picot meant to divide the Arab nation. The will of the people is clearly not what Abbas is interested in. “In this regard, we wish our brothers in Syria, Libya, Yemen, Iraq, to ​​regain security, safety and stability, and to ensure the unity of their land and their people,” Abbas is equating the desire of Arabs to achieve democracy with the terrorism of ISIS.

He is also telling the Kurds to go to hell.

“We kept on all of our commitments, but that Israel has reneged on those agreements…It has been agreed in accordance with the Declaration of Principles that was signed at the White House in 1993, and the subsequent agreements with Israel, that negotiating the final status issues of the Palestinian state would be a period not exceeding five years, before the end of 1999, followed by a signed peace agreement to end the Israeli occupation of the land of the occupied State of Palestine, based on the borders of June 1967.”

These are outright lies. Nothing in the Oslo process said that it would result in a Palestinian state and nothing in the process said that the final border would be based on the “1967 lines.” And the Palestinians continued to commit terror attacks even during those five years, in violation of the agreements, let alone the second intifada where the terror became all but official policy.

“The US administration through its Foreign Minister John Kerry insisted we go to negotiations, nine-month-sponsored (time period), but the Israeli government returned to the ‘Shuffle’ again, and made those negotiations going round in circles, and used them to gain time, and the imposition of new settlement facts on the ground.”

Another absolute lie. Israel froze the settlements for the nine months while Abbas refused to come to the negotiating table for eight of those months, and then only pretended to negotiate in order to have the US pressure Israel to extend the freeze.

We have participated in the funeral of Shimon Peres in order to send a message to everyone that we are seeking to achieve peace, but we are ready to go anywhere, even to the end of the world, to realize the demands of our people for freedom and independence.

Seriously? Attending a funeral while adamantly refusing to negotiate is proof of wanting peace? Abbas is all about the “messaging” but nothing about actual negotiating, which means a give and take.

UNESCO recently issued decisions, aimed at preserving the heritage in the occupied East Jerusalem, effacement of systematic operations and changes carried out by Israel.

This historic decision was the fruit of joint efforts made by Palestine and the Hashemite Kingdom of Jordan, together with our brothers and friends in the UNESCO, and these efforts will continue in order to protect our rights and heritage of the plots and schemes occupation.

Abbas announced that he would name streets and squares in PA-controlled areas after Hugo Chavez and Fidel Castro.

“We will not accept a proposal to recognize the Jewish state.” He said this twice.

Does anything else need to be said?