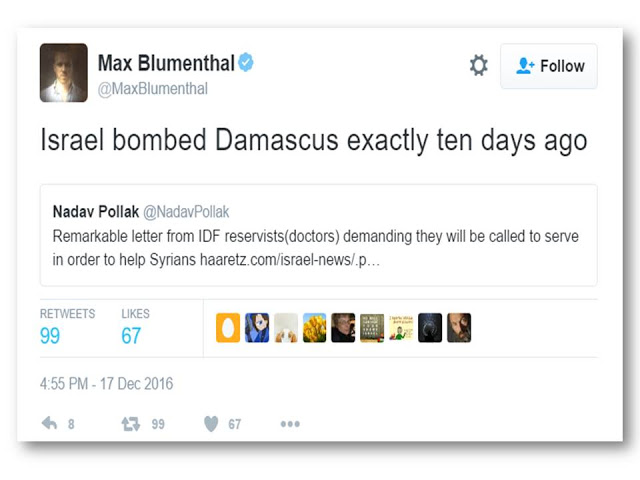 All too obviously, Blumenthal would like his followers to believe that while Israeli hypocrites claim they want to help Syrian civilians, the Israeli army just “bombed Damascus.”
What happened in reality is that the Syrian regime accused Israel of striking an airbase near Damascus; the target of the strike was reportedlya Hezbollah weapons depot. Unsurprisingly, a Syrian military source denounced the strike against the Mazzeh airbase as part of “desperate attempts by the Israeli enemy to support terrorist groups [i.e. groups fighting against Assad] and raise their low morale.” Some Syrian sources also claimed “that Hezbollah sites near the Syrian capital were also targeted Tuesday night by airstrikes that killed and injured a number of fighters in the Shiite militia.”
Since Blumenthal seems to root for an Assad victory in Syria, it’s understandable that he would be upset about any kind of damage inflicted on the blood-drenched tyrant and his ruthless backers.
But few would think that targeting a Hezbollah weapons depot at an airbase and perhaps even injuring some Hezbollah fighters can be accurately described as “Israel bombed Damascus.”
Yet, this is exactly how Blumenthal has been operating for years. It’s worthwhile recalling that in a scathing review of Blumenthal’s screed “Goliath” that was published three years ago, Eric Alterman – a leftist who finds much to criticize about Israel – described Blumenthal as “a profoundly unreliable narrator,” noting that his “accounts are mostly technically accurate, but often deliberately deceptive.” Predictably, Blumenthal rejected Alterman’s criticism, claiming that if much of his book was “technically accurate,” Alterman panned the book just to shield Israel from the devastating truth. Alterman patiently responded, attempting (in vain) to explain some very basic concepts to Blumenthal:
“Blumenthal … does not understand why I would concede that his book is ‘mostly technically accurate’ but remain so critical. He is, apparently, unfamiliar with the concept of ‘context.’ It might be technically accurate, for instance, to say that an individual who fatally shoots a crazed killer while said killer is mowing down schoolchildren with an assault-weapon is a ‘murderer.’ But it would also be profoundly misleading, given the context. And this is the problem with Blumenthal’s facts. He tells us only the facts he wishes us to know and withholds crucial ones that undermine his relentlessly anti-Israel narrative.”
Three years have passed since then, and as I showed in a recent post, Blumenthal has in the meantime alienated some of his erstwhile fans by applying the methods he used to demonize Israel to his “reporting” about Syria. Needless to say, Blumenthal and other leading anti-Israel activists still resent being called out for their glaring failure to condemn Assad and his allies for the carnage in Syria, and they continueto pose as the innocent victims of some kind of “organized smearing/lying campaign” that is of course supported, if not orchestrated, by evil Zionists. 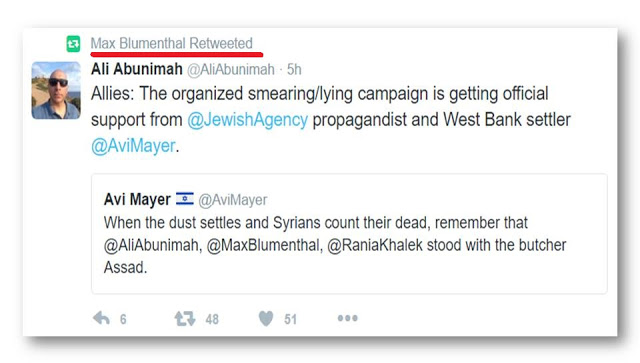 It also goes without saying that while anti-Israel activists like Blumenthal, Abunimah and Khalek find it hard to hide their hopes for an eventual victory of butcher Assad and his allies, they have only contempt for Israeli efforts to alleviate the suffering in Syria. So Rania Khalek was only too happy to retweet Max Blumenthal’s collaborator Dan Cohen, who wants Israelis to protest the IDF and “Israel’s direct involvement in the war on Syria” – by which he presumably means incidents like the supposed “bombing” of Damascus; Cohen also is impatient to see the Golan Heights handed over to Assad and his henchmen. 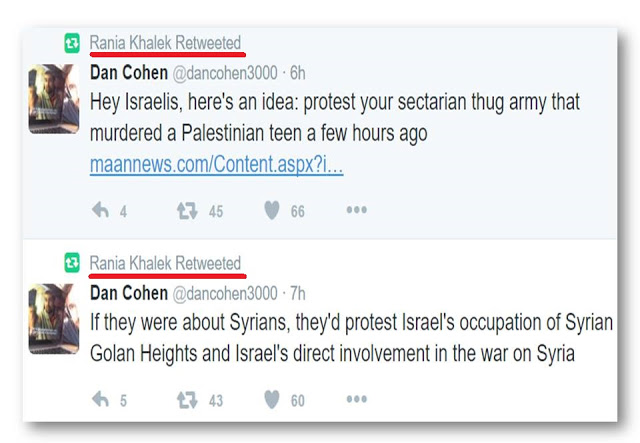 But while anti-Israel activists sneer, an Israeli grassroots campaign has raisedmore than $100,000 in just two days for emergency supplies to help families that have lost everything in the merciless war Assad is waging to stay in power.
To be fair to Assad and his armchair apologists on Twitter and in the blogosphere: they’d all be much happier if he did what he’s doing to his fellow Syrians to Israelis. When Assad recently declaredin an interview that he considers Israel as Syria’s worst enemy, Max Blumenthal and his ilk were surely pleased: no matter how many Syrians Assad and his brutal backers kill, at least Assad shares their obsessive hatred for the world’s only Jewish state. And whatever fake news can do to fuel this hatred, Max Blumenthal &Co will no doubt do their part.