TOP NEWS
http://elderofziyon.blogspot.com/2016/10/max-blumenthal-triggers-wave-of-buyers.html
by Petra Marquardt-Bigman
For the past few years, Max Blumenthal has worked hard to establish himself as a leading anti-Israel activist who is rightly celebrated whereverthere are Jew-haters. But while Blumenthal’s “pro-Palestinian” fans could see nothing wrong with his “journalism” as long as it served to demonize Israel, they have come to reject the exact same kind of “journalism” as deeply offensive hackery when Blumenthal turned his attention to Syria. Since many people were hoping that Syria’s truly heroic rescuers known as “White Helmets” would get this year’s Nobel Peace Prize, Blumenthal apparently felt an irresistible urge to show off his journalistic brilliance by exposing the Syria Campaign – a group supporting the White Helmets – as an evil tool of the West. Not deceived by “the lofty rhetoric about solidarity and the images of heroic rescuers rushing in to save lives,” Blumenthal triumphantly discovered “an agenda that aligns closely with the forces from Riyadh to Washington clamoring for regime change.”
So brilliant and so obvious at the same time, isn’t it: given Bashar al-Assad’s benevolent rule, no Syrian could possibly want “regime change”…
The backlash against Blumenthal and his closest allies – notably Ali Abunimah and some of his Electronic Intifada writers – was quick and furious. Admittedly, it was a rather enjoyable spectacle, because a lot of the harsh criticism now voiced by disappointed fans (who want to see Israel gone as much as the likes of Blumenthal) could have been quoted from posts I and other critics of his screeds have written: suddenly people were ready to denounce“Max’s fact-free delusions” and his “smear pieces;” my personal favorite was perhaps when Blumenthal’s gonzo journalism was mocked in a tweet ridiculinghow he usually concocts the “evidence” to indict his targets: “This NGO took money from a fund whose director once ate lunch in the same restaurant as an employee of an Islamophobe.” Incidentally, this is also an excellent description of the modus operandi regularly followed by Ali Abunimah and his Electronic Intifada crew.
Abunimah was quick to complainthat this was a “coordinated smear campaign that’s been going on for months,” and naturally, he had no doubt about the sinister forces behind it all: it was, of course, an “Israel-lobby inspired smear campaign.” Stalwart Abunimah fans like the perpetually “Angry Arab” agreed: it just couldn’t be a “coincidence that the campaign is being directed against some of the bravest voices against Israel in the US.”
Abunimah reacted with a torrent of tweets hurling abuse against his critics – and his bullying ultimately paid off: a blog post under the title“Palestinians decry Western Assad apologists” named only Max Blumenthal and linked to a statementsigned by about 120 “Palestinian signatories” that denounced unnamed “Allies We’re Not Proud Of.” The statement declared that the signatories “are embarrassed by the ways in which some individuals known for their work on Palestine have failed to account for some crucial context in their analysis of Syria” and decried the “tendency to heroize those who advocate on behalf of the Palestinian struggle,” vowing that the signatories would “no longer entertain individuals who fail to acknowledge the immediate concerns of besieged Syrians in their analysis.”
An Al Jazeera articleon the controversy also avoided naming names, though the author forcefully condemned activists who regard the “Palestinian cause” merely as a convenient “platform … to vent their selective anti-imperialist outrage.” Interestingly, this article painted a rather dramatic picture of the controversy:
“The Palestine solidarity movement is facing an unprecedented internal crisis, brought about not by the conflict with Israel but by the war in Syria. The latter has caused divisions that are arguably deeper and more damaging than those over how to realise Palestinian rights and aspirations. While the effects of Palestinian political infighting have remained largely domestic, the fissures over Syria have taken on a global dimension, and created unparalleled hostility among supporters of the Palestinian cause.”
There was indeed quite a bit of “hostility” on social media, some of it helpfully documented by Ali Abunimah himself. One telling example is archived here: Abunimah complained that the “Syrian American Medical Assoc. launches incitement campaign against me/others, claims we’re paid by Assad/Russia.” And apparently, Abunimah didn’t like getting a taste of his own medicine: “This level of incitement – comparing us to Hitler – is getting to dangerous levels.” Abunimah also tookoffense when his dear friend Max Blumenthal got the Max Blumenthal treatment from erstwhile fans. 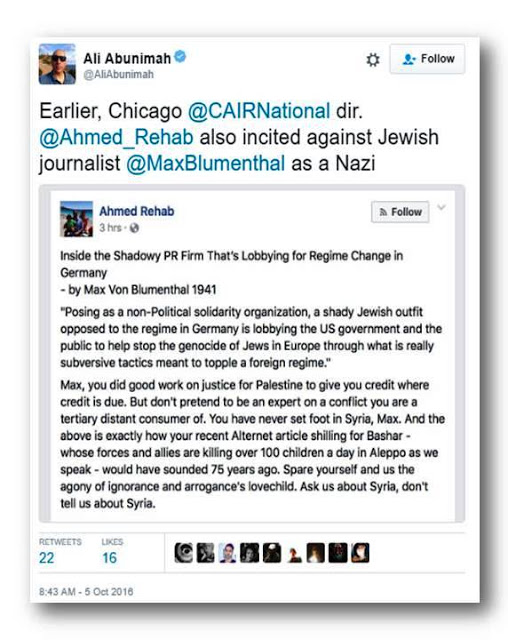 Clearly, Abunimah feels that Nazi smears should only be reserved for Israel.
The controversy also revealed a few interesting tidbits showing “pro-Palestinian” stars like Max Blumenthal and Rania Khalek in a rather unflattering light. If Blumenthal really“went to Gaza &burst into tears at a Hamas checkpoint,” the boundless admiration he has expressed for Hamas perhaps also reflects some rather unhealthy psychological dispositions: the more brutal the bully, the more admiration Blumenthal will feel – which may well help to explain why Blumenthal has so much despisement for Israel and the US, and so much respect for Hamas, Assad, Russia and Iran. 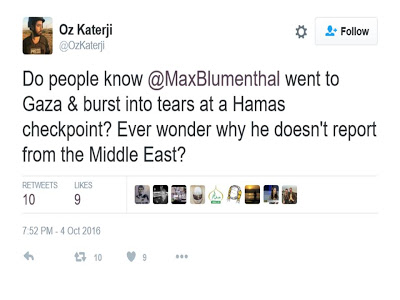 But while I couldn’t find confirmation for the delightful insider rumor about Hamas reducing Blumenthal to tears, I did manage to find evidence for the accusationthat Electronic Intifada “associate editor” Rania Khalek is a plagiarist: if you check out this 2008 post on “6 ‘Non-Lethal’ Weapons That’ll Make You Wish You Were Dead” and scroll to the comments, you will find one posted on August 4th, 2011, which says: “This article has recently been plagiarized by someone named Rania Khalek for a website called Alternet. It’s not even subtle. […] The title of the stolen article is ‘6 Creepy New Weapons the Police and Military Use To Subdue Unarmed People’ and it was published August 1st 2011.” Sure enough, there is such an Alternet article by Khalek, which is marked as “updated” at the beginning and adorned with an “EDITOR’S NOTE” at the end stating: “This article has been corrected since its original publication for more accurate attribution to original sources.” Isn’t this a delicate way to put it…
Khalek’s author archive at Alternet shows that her regular contributions at the site ended a few months later in January 2012, but resumed again after three years in January 2015 – and amazingly enough, the plagiarized piece was promptly recycled under the exact same title, without the “editor’s note” and without any hint that it had been published years earlier. I suppose that’s Alternet quality journalism …
Last but not least, the disappointment expressed by erstwhile Blumenthal fans offered many more revealing glimpses at how truly pathetic many supporters of the “Palestinian cause” are. One heartbroken Blumenthal fan lamented: “I regret writing a review of @MaxBlumenthal’s Gaza book for @MuftahOrg http://muftah.org/a-review-of-max-blumenthals-the-51-day-war-ruin-and-resistance-in-gaza/ … I see that he’s fallen as low as Rania Khalek.” Check out the linked review posted on July 29, 2015, and you’ll find the highest praise for the “fearless integrity that fuels Blumenthal’s reporting.” You’ll also find that this review is illustrated with an image of the aftermath of a deadly “explosion … at a public garden near Shifa hospital in Gaza City on July 28, 2014.” It’s hard to think of a better illustration for a review praising Blumenthal, because Israel had immediately said that the carnage was caused by Hamas rockets, and even Amnesty International ultimately conceded in the spring of 2015 that “the projectile was a Palestinian rocket.” Ignoring this fact is really a good example of Blumenthal-style “integrity”.
So here’s a lesson for erstwhile Blumenthal fan Joey Husseini Ayoub and the likes of him: if you hail a hack like Blumenthal who glorifies an Islamist terror group like Hamas for his “fearless integrity,” you just look utterly pathetic when you denounce him for serving as an apologist for Syria’s Assad: Hamas and Assad have pretty much the same concern for the people under their rule. Just as the current carnage in Syria is due to Assad’s determination to hold on to power, all the wars in Gaza in the last decade are due to Hamas’ cynical efforts to polish their credentials as the “Islamic Resistance Movement.”
But I suppose there’s really nothing more “pro-Palestinian” than to quickly forget how Hamas threwopponents from high-rises in Gaza, tortured them and draggedtheir bodies through the streets, or executed them ISIS-style on public squares – a spectacle that was actually defendedby Ali Abunimah. Maybe Max Blumenthal recalled atrocities like these when he burst into tears at a Hamas checkpoint: it must be really scary to be at the mercy of people who treat their own like this – even if you’re a “journalist” who came to glorify those brutal bullies.