TOP NEWS
http://elderofziyon.blogspot.com/2016/09/manal-tamimi-still-proud-to-showcase.html
Manal Tamimi: Still proud to showcase her hate on Twitter
Petra Marquardt-Bigman
When I first documented Manal Tamimi’s hate-filled views under the title “Screaming hate on Twitter” a year ago, Manal Tamimi reacted with defiant pride. As I documented in an update to this post, she responded on Facebook and Twitter reaffirming her views, and promptly continued posting additional tweets expressing her hatred for Israel and her support for terrorist attacks and a “Third Intifada”. More recently, presumably in response to my Tablet piece marking the 15th anniversary of the Sbarro bombing, she took the trouble to leave a comment on my site, thanking me (again) “4 taking all this time 2 follow me on Twitter & FB and taking time 2 write this article about me” and encouraging me to “keep [up] the good work by keeping following me so you will be updated.”
So I should really say: dear Manal, you are very welcome. In fact, it is me who should thank you for taking all this time to provide us with such a revealing glimpse of your ardent support for terror and your equally ardent Jew-hatred.
But courtesies aside, I’ll admit that I was not just being polite when I followed Manal Tamimi’s encouragement and put together a slide show featuring about 40 of her tweets. There are several reasons why her tweets are important. First, it should be recalled that Ben Ehrenreich’s tribute to the Tamimis, which was featured as a New York Times Magazine cover story three years ago, presented her as a member of the “homegrown media team” that runs the PR efforts of Tamimi Press, noting that Manal Tamimi had taken it upon herself to supplement these efforts “with a steady outpouring of tweets (@screamingtamimi).” So it seems fair to conclude that the views she expresses are not just her own, but reflect the outlook of her fellow “activists” in Nabi Saleh. Indeed, if one considers the publicly available social media posts of other prominent Tamimi clan members (also documented in this EoZ video), it is clear that Manal Tamimi’s output on Twitter is quite representative of the hatred and extremism they all regularly exhibit – so far apparently without jeopardizing the support they’ve enjoyed for years from Amnesty International.
Moreover, given the fact that the prevalence of similar attitudes has been documented in Palestinian opinion surveys for almost two decades, it would be wrong to see Manal Tamimi’s tweets just as a reflection of what the Tamimis stand for. So-called “pro-Palestinian” activists often demand that more attention should be paid to Palestinian voices, and the outspoken Manal Tamimi should definitely count as a Palestinian voice that can tell you all you always wanted to know about Palestinian “resistance” – but were rightly afraid to ask.
However, it would perhaps be unfair not to note that in her recent comment on my website, Manal Tamimi claimed to know the difference “between zionists & jew,” and she asserted: “I have a very good jew friends who come 2 my house where I cook meals and eat , laugh and enjoy our time together.”
When you view her tweets in the slide show, you can decide for yourself how well Manal Tamimi knows the difference “between Zionists & jew.” But given her reference to “very good jew friends who come 2 my house,” one should perhaps recall how she responded last fall, when veteran Israeli peace activist Gershon Baskin criticized her on Twitter for calling a teenage terrorist “habibi” (a common Arabic term of endearment). But Manal Tamimi saw no reason to feel embarrassed and responded: “@gershonbaskin shame on me ???? Shame on me ???? And why is that Mr Gershon,” reminding Baskin later on: “uve been in my house & my children welcome u despite u r jew, do u remember?”
Some four weeks after this exchange with Baskin, Manal Tamimi posted a cartoon showing a Nazi figure beating a hideous creature marked as a Jew. As you can see, there is an almost identical image that identifies the creature as a “Jew Rat.” 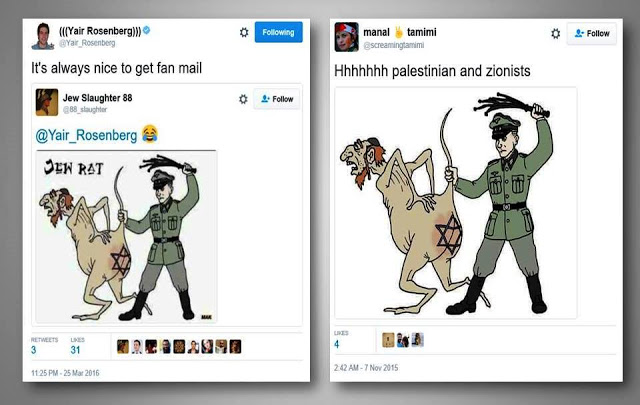 The comment Manal Tamimi added to the image – “Hhhhhhh palestinian and zionists” – equated Palestinians with the Nazi figure, which was a somewhat surprising departure from her usual habit of denouncing Israelis as Nazis or “zioNazists”. When an obviously well-meaning Twitter user warned her in Arabic* that she had posted “a picture of Nazism” even though “the Palestinians are more honorable than the Nazis, they are defending their land and their freedom,” Manal Tamimi confidently declared: “The important thing is the idea, we the Palestinians are the ones who are going to teach Israel a lesson, we are going to hurt them and we will achieve victory over them as well.”

Perhaps she just meant to say something like “Sieg Heil”?
*Translations from Arabic courtesy of Ibn Boutros; since the Tamimis sometimes delete posts that attract widespread public criticism, the post is archived here.