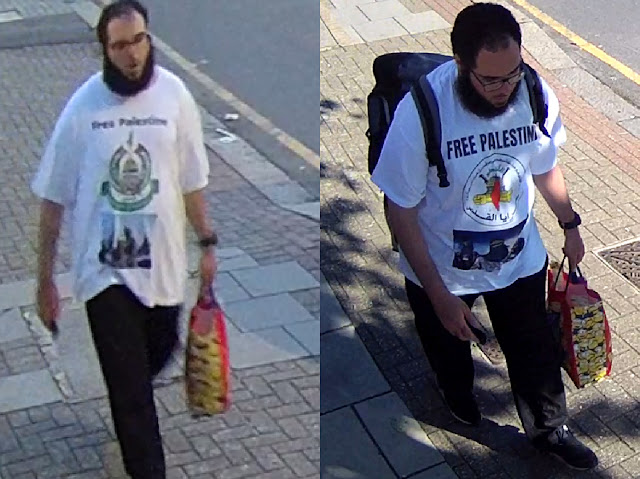 From the London Metropolitan Police:

A man reported to police after wearing T-shirts supporting proscribed terrorist groups has admitted offences under the Terrorism Act.
Feras Al Jayoosi, 34 (02.06.87), of Swindon was observed on Tuesday, 8 and Wednesday, 9 June wearing two T-shirts in Golders Green in north London – one bearing the logo of the Palestinian Islamic Jihad (PIJ) group, and the other with the Hamas Izz al-Din al-Qassem Brigades logo. Both are proscribed terrorist organisations.
The sightings were reported to police, and officers from the Met’s Counter Terrorism Command (SO15) launched an investigation.
Al Jayoosi was quickly identified as the person wearing the T-shirts, and was arrested at his home address two days later, on Friday, 11 June.
Further enquiries revealed he had worn the Hamas Izz al-Din al-Qassem Brigades T-shirt in Swindon on Sunday, 30 May.
He was charged on Wednesday, 27 October.
Appearing at Westminster Magistrates’ Court on Friday, 12 November, Al Jayoosi admitted to four charges of wearing an article, namely a T-shirt, in such a way or in such circumstances as to arouse reasonable suspicion that he was a supporter of a proscribed organisation, contrary to section 13(1) and (3) of the Terrorism Act 2000.
Following the pleas, he was conditionally bailed, and will be sentenced at the same court on Friday, 17 December.

Golders Green is a heavily Jewish neighborhood in London.
This is a classic case of where the antisemitism of the “anti-Zionists” is obvious to all. Unless I’m mistaken, Jayoosi custom made these T-shirts – they both say “Free Palestine” on top and have what appears to ba a photo of masked terrorists on the bottom, with the logos of two different terror organizations in the center. It seems unlikely that these shirts with such similarities are for sale anywhere.
This means that Jayoosi printed up these shirts, included the “Free Palestine” part to make them look like mainstream political messages, and deliberately walked with them – on different occasions – through a Jewish neighborhood where he knew he would upset residents. He probably assumed that the “Free Palestine” would make him immune to prosecution since that is a common slogan in British locales.
Ironically, his wearing both shirts is the best indication that Jayoosi is not a terrorist – a real terrorist would only associate himself with one of the terror groups. His “Free Palestine” message was aimed at intimidating Jews first and foremost, and only secondarily to show solidarity with Palestinian terror groups. It is the modern, single-person equivalent to the neo-Nazi planned march through the Jewish neighborhood of Skokie in 1977.