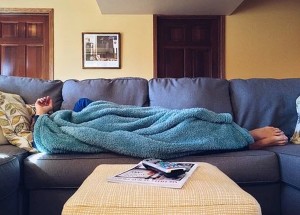 Ramat Gan, February 27 – A resident who shared his numerous ideas with his wife about getting a jump on preparations for a Jewish festival that occurs in April this year has determined that if one positions himself just right on the living room sofa, one can get a decent night’s slumber.
Guy Harpaz, 40, suggested to his spouse they might take advantage of the relative calm in their schedule over the next several weeks to put a serious dent in cleaning for Passover, a holiday that has for many generations involved intensive cleaning of the entire home in the days and weeks prior to the festival itself. Mr Harpaz reported this morning (Thursday) that as a result of his epiphany he has discovered two specific ways to lie on the couch that do not result in back or neck pain, and that allow the person lying there to wake up a minimal number of times during the night.
“I was thinking we could get a head start on Pesach cleaning, and mentioned as much to my wife,” recalled the father of three. “We have this new power washer and vacuum cleaner, and it might be a good idea to start putting them to good use. I found that if you put one of couch cushions under your neck and sleep on your side with another pillow between your head and the armrest, it’s almost like an actual bed. I only woke up like four times, not including my usual 3 AM bathroom run.”
Other members of the family appear reluctant to discuss Mr. Harpaz’s proposal. “I, uh, I have homework I should be doing,” demurred Adi, 12, as she shot a worried glance at her mother and hurried to her bedroom. “Also there’s definitely laundry I should be putting away. Sorry, busy busy busy.”
“Dad spends most of his waking hours on the couch as it is,” remarked Matan, 9. “Not sure what he’s on about.”
Limor Harpaz, the mother of the family and the recipient of the original cleaning suggestion, shot a reporter a look that warned of dire consequences if the journalist so much as thought about weighing the possibility of issuing an offhand oblique reference to Passover cleaning when nearly six weeks remain until it occurs, with such consequences including measures that involve a living room couch only insofar as said item of furniture would be flying toward the skull of said journalist.