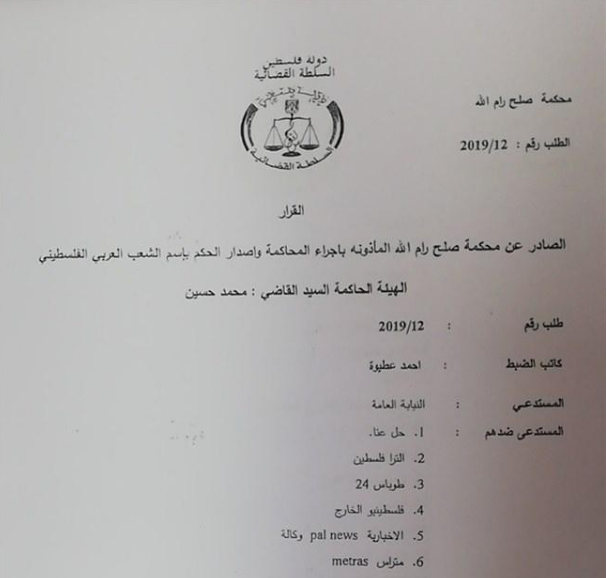 A court in Ramallah earlier this week ordered the blocking of 59 Palestinian websites, blogs and Facebook pages that oppose the Palestinian Authority and PA President Mahmoud Abbas.

The decision was made at the request of the Palestinian prosecution, but it is widely assumed that senior PA officials were behind the move. The prosecution, in its petition to the court, argued that the sites disseminate harmful content about the PA and its officials and are likely to be used to incite lawlessness.

Some of the blocked websites are very popular among Palestinians and in the rest of the Arab world. Some report critically on developments in the West Bank and Gaza, while others are identified with Hamas, Islamic Jihad and the camp of Mohammed Dahlan, one of Abbas’ leading opponents. The list includes the Arab48 website, which is based in Haifa and is identified with the Balad party.

The court said it found that the websites have published articles and photos that “threaten national security and civic peace.”

The court accepted the PA Attorney General’s argument that the websites have attacked and offended “symbols of the Palestinian Authority.”

Most of the websites targeted by the PA are affiliated with Hamas, Islamic Jihad and Mohammed Dahlan, a senior Fatah official and archival of Abbas. Some of the websites are known for their criticism of financial and administrative corruption of the PA and its senior officials.

The law being enforced, which is truly chilling in that it can sentence anyone who makes fun of Mahmoud Abbas to up to 15 year of hard labor, was passed in 2017 to little news coverage. Officially the law is called a “cybercrime law.”

The judge who passed the ban said “These sites have published phrases and pictures and articles on the Internet threatening national security and civil peace and disruption of public order and public morals and that arouse Palestinian public opinion.

A survey of some of the sites shows nothing that is remotely pro-Israel.

Perhaps the most surprising thing about this story is that Mohammed Shatyyeh, the prime minister, heavily criticized the proposed ban. “We have asked the attorney general and the competent authorities to reconsider this decision,” Shtayyeh told reporters in Tulkarem.

Shtayyeh is an astute politician and realizes how bad such a ban looks. His position gives him no authority to do anything about it except support an appeal on the decision. The Supreme Court members were handpicked by Abbas.

Haaretz reports that an appeal is likely to be successful; we’ll see. Palestinian journalists are heavily covering this story.