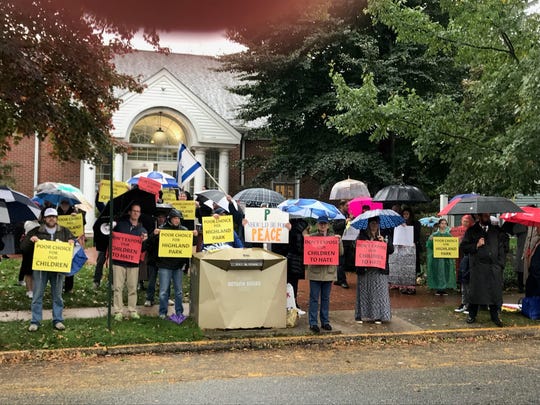 The controversial “P is for Palestine” book reading went on as planned Sunday at the Highland Park Public Library, after being rescheduled from May.

About four adults and three children attended the event. Those inside, which included borough resident Lisa Ben-Haim, were members of the local Jewish community, Ben-Haim said.

“It started at 2 and she rambled until almost 3 o’clock, and then she started reading from the book,” Ben-Haim said. “All of us had planned to walk out in protest when she got to ‘I is for Intifada,’ but it was so painful sitting there listening to her, we walked out at E.”

Protesters of the reading appeared outside the venue. With about 125 of all ages, the group was on hand to “let their voices be heard,” Ben-Haim said. She added that the protesters had posters and were present to mark that they felt the event was “inappropriate.”

There were a handful of supporters on the opposite side of the street, said borough resident Josh Pruzansky. The road was closed, and 10 police officers ensured the safety and security of both groups.

This is a peaceful protest, Pruzansky said, but the author, Golbarg Bashi, “supports the BDS movement.”

“We don’t want her speaking to our children in a community library,” he said. “She is a person who sponsors hate, sponsors violence. BDS was called antisemitism by the United Nations, by the U.S. Congress, by the Parliament of Germany. It was called antisemitism by the state of New Jersey. Why are we bringing an anti-Semite to our library to speak to our children on a Jewish holiday?”

Here was the pathetic counter-protest with about three people: 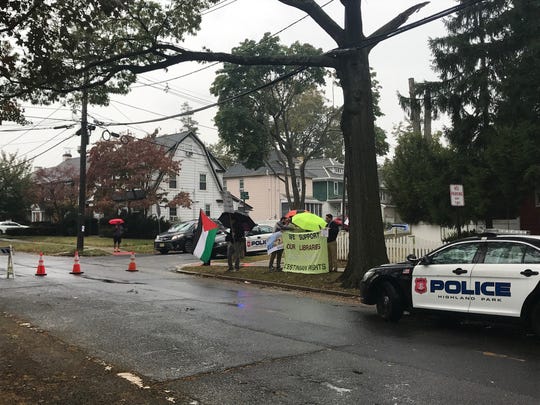 I am told that Pruzansky, a key organizer of the protest, won the bidding for the Chatan Torah honor on Simchat Torah, and his win was announced as “P is for Pruzansky” to the laughs of the congregants.

Mondoweiss is calling protests against a book that seeks to normalize BDS and a violent uprising against Jewish civilians “censorship” even though the book supposedly sold out of its printings.

Bashi has also written an anti-Israel children’s counting book where Palestinian children climb “the last olive tree in the land yet to be free” that the “woeful woodcutter” wants to chop down.