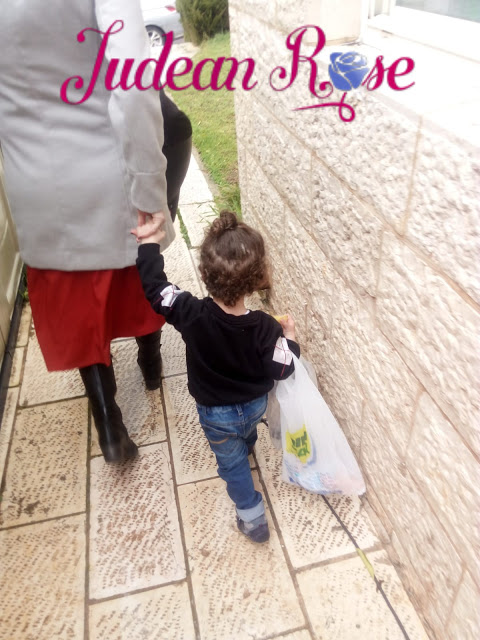 My grandson’s second birthday party had to be canceled due to rocket fire. I had arranged to attend the festivities and had set the alarm clock to meet my ride at approximately dawn o’clock. But when I rolled out of bed in the near darkness, I had two messages. One from my ride, and one from my daughter in-law, both telling me that it just wasn’t happening today. Maybe tomorrow.
I’d known the night before that it might not happen. Because when the rockets fly thick and fast, school is canceled, and no one can work. The party was to be held in my grandson’s daycare center. But there was no daycare that day. Or the next.
When the rockets are seeking out Jewish bodies to destroy, Jewish children don’t get to have birthday parties. They stay instead in their safe rooms and shelters, frightened and shaking as they hear the sirens and the booms.  “Every red alert makes me shake in my hands and legs. Every boom terrifies me,” said one little girl in Sderot.
I can confirm that the same is true of all of the children of Southern Israel, including my grandchildren who live in the city of Netivot. I watched my granddaughter’s face crumble when she heard an ambulance go by during dinner in our Sukkah in Efrat, this past fall. S. literally dissolved into tears, though she had been in a fine mood until that moment. We understood: she’d thought it was a red alert, a rocket siren.
With well-practiced hands, my son and daughter in-law put my granddaughter to bed. The stress of the moment had wiped her out. “This is what it means to grow up in Netivot,” said my daughter in-law.

It was as if, S., my granddaughter, had lost herself, lost something essential, when that ambulance siren sounded. She was no longer in control of herself or her story. Sirens meant rockets, and they were bigger than she, and unpredictable, ruling over all.

Including my grandson’s birthday party, which, by the time this piece is published, will still not have occurred. The rockets have stopped, but it’s hard living in between the rockets, rearranging and reshuffling life. It’s hard to make space for what already should have been.
Every time there is rocket fire, I feel distress for my grandchildren, for the fear I know they experience. The spotty sleep, the running to shelter, and of course, the anticipated celebrations canceled. Trying not to go stir-crazy in a single, small room, the entire family just works to conserve energy, to catch some rest as the rockets fly, the sirens blare, and the booms sound, telling you just how close it was this time. (Sometimes much too close for comfort.)
In the South, it’s not just the rockets, of course. There are the balloons, which aren’t toys to play with, but something sent by people who want to kill you, because you are a Jewish child. How do you come to grips with something like that?
How does a child come to grips with people who shoot things at you, bringing on a whole set of scary events: sirens, booms, running into safe rooms or shelters or stairwells in the middle of the candlelit peace of a Sabbath meal, or the happiness of a birthday party, or in the case of my grandson, a canceled party, the canceling of happiness and what should have been a happy time, which is now instead, a scary time that makes you shake.

My two-year-old grandson just wants to be a two-year-old. He shouldn’t have to deal with these awful terrorists who think that Jewish children–people like my little grandson G.–aren’t really human, but some kind of pestilence or vermin. That this being the case, little Jews can be targeted at will and no one will care how they feel, or whether they feel at all.

And maybe no one does.

Because the list of people who don’t care about my grandson is long. It includes not only Hamas, the Palestinian Authority, and Palestinian Islamic Jihad (PIJ) (which claims responsibility for the most recent attacks), but also Jeremy Ben Ami, Linda Sarsour, Peter Beinart, Ilhan Omar, Rashida Tlaib, and Bernie Sanders and anyone who votes Democrat in the next election come November.

Not that Trump can solve this problem any better than Israel’s own leaders. But better Trump than any Dem, because Trump sees Israel as an ally to work with and assist, whereas, the Dems see Israel as an abuser and occupier. They see Israel as needing to be brought into line, and punished through the withholding of their money and approbation.

This is the immature paternalistic vision of the Arab people which crowds out every other perspective, so that we don’t see the canceled birthday parties, the Jewish children shaking with fear, the exploding miscarriage rate in Southern Israel, or the rampant PTSD destroying families and careers. The media doesn’t care to write about this even one little bit, and if they do, they are sure that it’s Israel that started it all, that it is Israel’s own fault.

I am powerless to do anything about this, as powerless as the children of Southern Israel to stop the sirens and the booms that send them into safe rooms and destroy what should have been a day of song and cake and presents. A day when turning two should have been the main event. I don’t know a right way to explain this to children.

I only know that it is wrong.

Sometimes I wonder why my son and his small family, of all the places in the world, chose to live in Southern Israel, knowing what it would be like, the sirens, the booms, the running for shelter. But I already know the answer: If Jews will not live in Southern Israel, the enemy will take it over, and the rockets will come closer to the center of the country.

Which means that the Jews of Southern Israel are heroes and patriots. On the other hand, there is seemingly no solution to their problem.

Neither Gantz nor Bibi can stop the rockets or the balloons.
That ship sailed with Disengagement.
There is no way to roll it back. Nor can Israel carpet bomb the innocent or even not-so-innocent civilians of Gaza. Because the world won’t stand for it, or because Israel isn’t brave enough or stupid enough to do so. We don’t want to do it. But truly, there is no other way to stop the rockets, to stop the balloons, to stop the shaking limbs of the children who live under this reign of terror, while just trying to have a normal life.
My grandchildren are lucky. Their parents have a car. They got in the car and drove to Jerusalem to get a break from it all, the sirens, the booms, the crowded safe room. They visited the aquarium, had pizza, and played Grandma’s piano in Efrat. Then they went home, not knowing how long they will have until the next time the rockets fall, sending them into a limbo where life is put on hold and children shake, not knowing who among them will live and who will die.