Since I first began researching and writingabout Linda Sarsour in the summer of 2016 – after she complained about the lack of support for the “Palestinian cause” at the Democratic National Convention – I have been a bit astonished that, whenever I come across some new information about her, it fits in amazingly well with what I’ve learnt about her previously.
The perhaps most striking example is one that goes back exactly 14 years. On December 15, 2003, the New York area paper Newsdayran a reportabout reactions from local residents to the capture of the Iraqi dictator Saddam Hussein. The article begins with the view of an imam:
“Asked what should be done with the captured Saddam Hussein, an Iraqi-born leader of a mosque in Queens said the kindest thing would be a public hanging. ‘If you put him in the streets [of Baghdad] now, in a little while you would find him in pieces,’ said Fadhel Al-Sahlani, the imam, or spiritual leader, of the Al-Khoei Benevolent Foundation mosque.”
Then we get a short summary:
“Opinions in the local Muslim community varied yesterday on what should be done with Hussein. The judgment depended largely on the national origin of the person interviewed. For instance, one woman of Palestinian descent said that Hussein, despite his many faults, was a hero to many people in her community. But those who lived in or around Iraq – and knew his brutality firsthand – were harsh in the judgment of the deposed dictator.”
Sorry, no prize for guessing who the “woman of Palestinian descent” was who spoke up for the widely loathed Iraqi dictator…
“Linda Sarsour, who is American-born and of Palestinian descent, said many Palestinians viewed Hussein as a hero because he steadfastly supported Palestinians in their struggle against Israel. She and other Palestinian New Yorkers felt humiliated by the way Hussein was caught and shown, disheveled and pathetic-looking, on international television, Sarsour said. ‘I think he’s done a lot of things he shouldn’t have done, but I was hurt. My Arab pride was hurt,’ said Sarsour, 23, of Bensonhurst. ‘Palestinians are under so much oppression and no other Arab country ever helped them.’”
Well, what can one say about Linda Sarsour’s “Arab pride”…
But it’s worthwhile recalling the context of 2003, when Linda Sarsour rightly described Saddam Hussein as a Palestinian “hero” who “steadfastly supported Palestinians in their struggle against Israel.” The supportwas primarily “financial support for Palestinian terror groups, including Hamas, Islamic Jihad, the Palestine Liberation Front, and the Arab Liberation Front, and … money to the families of Palestinian suicide bombers. In April 2002, Iraq increased the amount of such payments from $10,000 to $25,000.”
This increase of payments to Palestinian terrorists was of course Saddam Hussein’s way to contribute to the murderous Al-Aqsa Intifada that was going on at the time, and it is very telling that Linda Sarsour was so willing to show her appreciation for Hussein’s efforts to encourage Palestinian terror attacks, which included many suicide bombings targeting buses, restaurants and shopping areas. 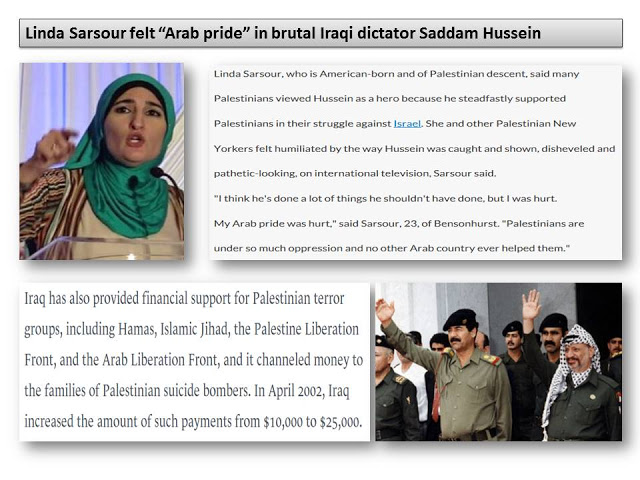 Let’s now turn to a very recent story: you’ve probably heard that longtime Berkeley lecturer Hatem Bazian, who co-founded “Students for Justice in Palestine,” was recently caught sharing what has rightly been describedas “insanely anti-Semitic memes.” When Berkeley condemned the tweets, Bazian came up with “[the] world’s least convincing apology;” one reason that his apology was so unconvincing is that he has a long history “of presenting anti-Semitism under the guise of anti-Zionism.”
So it’s of course entirely expected that Linda Sarsour is a fan…
As far as Sarsour is concerned, Bazian is one of those Muslims “who speak truth w/ courage & w/o apology;” she has also praisedBazian “for speaking truth to power & standing for Palestinians w/ the utmost integrity.” Last year, Sarsour describedBazian as “a revered leader in the Muslim community;” and just two weeks ago, Sarsour declared she was “proud” of Bazian’s relentless BDS activism.
On this last point, I actually agree with her: Bazian is clearly an exemplary BDS activist, and it’s easy to see why Sarsour would be so enthusiastic about him…