TOP NEWS
http://jewishrefugees.blogspot.com/2017/06/libyas-forgotten-war-against-its-jews.html
In June 1967, while mobs raged against Jews in the streets of Tripoli and Benghazi, a young girl was sheltered by a brave Muslim until it was safe enough for her family to leave the country. That girl was to become Mrs David Harris, the author of this Algemeiner article highlighting the forgotten consequences in Libya of Israel’s Six Day War victory.  (With thanks: Imre) 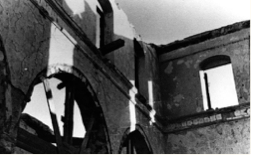 Shell of the Zawiya synagogue, burnt down in the 1945 pogrom

Notwithstanding constitutional guarantees provided by the new Libyan nation, restrictions on Jews were gradually imposed. By 1961, Jews could not vote, hold public office, serve in the army, get passports, purchase new property, acquire majority ownership in any new business or supervise their own communal affairs. Yet the Jews remained, umbilically linked to their ancestral land and hoping against hope, despite all the evidence to the contrary, for positive change.

Then, in June 1967, war broke out in the Middle East. Inspired by Nasser’s pan-Arab appeals, Libyans took to the streets and attacked the Jewish community.
By the time calm was restored, 18 Jews in Tripoli, the country’s capital, were dead. The toll might have risen had it not been for the courage of Cesare Pasquinelli, Italy’s ambassador to Libya, who ordered all Italian diplomatic missions in the country to extend their protection to the Jews.
A very few Muslims helped as well, including one — who at great risk — hid the teenager who was to become my wife, along with her parents and seven siblings, for two weeks until they were able to leave the country. Tellingly, however, this righteous Libyan has refused any public recognition, lest his life be put in danger for saving Jews.
Within a matter of weeks, all the remaining Jews of Libya fled abroad, urged to do so “temporarily” by the government. Each was permitted one suitcase and the equivalent of $50. Half headed for Israel; 2,000 went to Italy. In many respects, the tragic fate of Libya’s Jews was no different from that of hundreds of thousands of Jews in other Arab countries.
To no one’s surprise, this temporary exodus became permanent. Colonel Muammar Gaddafi seized power in 1969; the following year, he announced a series of laws to confiscate the assets of Libya’s Jews, issuing bonds providing for “fair compensation” within 15 years. But 1985 came and went with no compensation paid.
And so, with only a few scattered international protests, scant press attention and silence from the United Nations, another once-thriving Jewish community in the Arab world, like so many others, came to an end — and the rich tapestry of the region’s diversity took yet another irretrievable hit.