Between 4 – 7 November 1945, the Jews of Libya suffered a murderous pogrom which snuffed out 133 lives. This article in Focus on Israel by Leone Nauri gives the context of this massacre without precedent and lists the names of the dead. Nauri concludes that it is about time that Libyan Jews started a political campaign for their rights. (With thanks: Lucky) 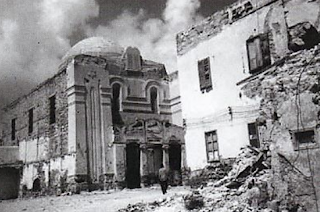 I read continuously about the good old days in Libya…and I remain incredulous and amazed.

It would be enough to remember that from that country we were hunted and expelled after three pogroms and without a penny in our pockets for not believing these lies but probably it is not enough — so I would like to remind my fellow villagers how we lived, without Stockholm or other syndromes.

I would like to remind you that when we left the house the silent advice of the parents was: head down and brisk walking. That way, the chances of being insulted, spat upon, beaten, were between 30 and 50 percent. When we left home there was possibly more than one of us, and we accompanied each other. Generally every one of us had a “ghibbor and courageous” companion to return with.

When I came back, my mother always told me that I was a brawler,  because in the end if I followed safer roads, with my head down, with a brisk pace, or running, I would probably have reduced the number of fights! In the narrowest streets with small sidewalks if you were lost in thought and did not realize that a Muslim came from the opposite side and therefore you did not get off the sidewalk and caught a slap and a series of insults from the “ia kelb” (you dog), to “iudi kafr” (Jew non–believer). And this was the rule, it wasn’t a special situation, it was just so. When you came back from the temple they waited outside and attacked you.

I remember that our little group coming out of Slat dar el Malte consisted of myself,  Leone Nauri, Victor Meghnagi z””l and Simo Dula. He was the real ghibbor (hero) , he put his tongue between his teeth and said: ‘don’t answer randomly if they beat you, answer to their leader and not to others’.

My parents always told me when I told them to leave that I was exaggerating! I would like to remind you first of all that in 1945 40,000 Jews and 500,000 Arabs lived in Libya in a territory three times the size of Italy and that our annihilation led to our progressive expulsion despite the fact that we were residents for over 2,000 years, much earlier than the Muslims, but this is never remembered, no one gets up with the house keys to request our homes and our rights.

We were about eight percent of the population and we should have 8% of the territory, of the oil, all of the money that has robbed from us, beyond revaluation and interest. Hundreds of synagogues turned into mosques or  were set on fire, hundreds of deaths and our cemetery repaved with the asphalt of a highway. We did not resist with arms, neither did the UN nor the other international associations listen to us. But I think we should start thinking about a political movement, even with the use of fashionable flotillas. Damn them.

First of all I would like to recall the context in which the pogrom took place. Libya was a Turkish colony, then an Italian colony and after the war it was under the control of Great Britain. On November 4, 1945, Muslims attacked Jews wherever they were, burned hundreds of shops, houses, synagogues and murdered 133 people. The British authorities did not lift a finger for four days and four nights!

The Jews had always trusted Muslims, and despite some problems they would never have imagined an assault of those proportions. This caused an unbridgeable gap with the Muslims and an absolute lack of trust in the British authorities. The massacres lasted from 4 to 7 November and I am not aware of any commission of inquiry of the UN or international associations. To be honest, it must be remembered that even some Muslim dignitaries tried to stop the massacres and that only after that date did the British intervene and stop them.

70 years since the Tripoli pogrom

Remembering the 1945 riots in Libya