Linda Sarsour published on Facebook the classic antisemitic meme that American Jews who support Israel’s existence are guilty of being more loyal to Israel than to America: 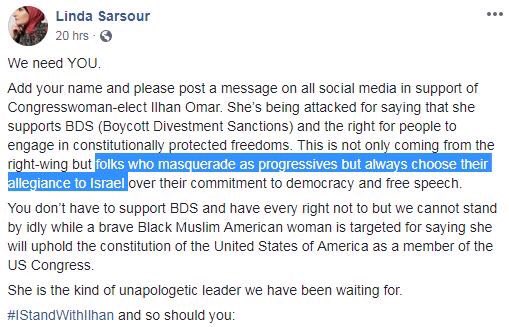 This caused some consternation among Jewish women who may be supportive of every single critic of Israel but who still have some vestiges of pride in their Judaism and awareness of the history of that slur:

Really, really, really disappointed to see this canard of dual loyalties from @lsarsour. I don’t know if she’s subtweeting my piece which actually defended @IlhanMN (https://t.co/84rOBEZAwf) but I am pretty upset by this. What a betrayal of the intersectional ideal. pic.twitter.com/e3JfdTn0W2

Hi @lsarsour – you may not know this, but when you imply Jews put loyalty to #Israel above all else – including their progressive values – you’re feeding into a dangerous anti Semitic trope. Please choose your words more carefully.  @AJCGlobal @ADL_National pic.twitter.com/BBqBgb621e

Zioness, the unapologetically Zionist feminist group, was much stronger in its criticism:

.@lsarsour you are the only one masquerading as a progressive by exploiting social justice spaces to spread anti-Semitism. For centuries anti-Semites have accused Jews of dual loyalty. pic.twitter.com/ODI7BvZWwD

The ADL also criticized Sarsour by retweeting the AJC:

Accusing Jews of dual loyalty is one of the oldest and most pernicious antisemitic tropes. No surprise to see it coming from @LSarsour. How long will progressive leaders continue to look the other way in the face of this hate? pic.twitter.com/cY6Mg7KhB4

But the ADL, which has been leaning heavily left, already knew Sarsour was problematic because she had previously accused them of being Islamophobic and absurdly claims that they are responsible for SU police brutality against minorities.
Will the Jewish feminist embracers of intersectionality and supporters of the Women’s March learn the same lesson the ADL did?
I somehow doubt it.
(See also Ben Shapiro here.)