TOP NEWS
http://jewishrefugees.blogspot.com/2017/12/levana-zamir-gets-award-for-outstanding.html
Levana Zamir,  the president of the umbrella organisation of Associations of Jews from Arab countries in Israel, was one of 12 Mizrahi figures given the Ministry of Education Award for their contribution to Israeli society and to the State of Israel. 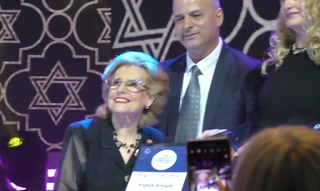 Mrs Zamir received her award along with 11 other Mizrahim, including Shlomo Hillel and Erez Biton. The award was inaugurated by the ministry to honour Mizrahim who have made an outstanding contribution to the state of Israel, and promote their achievements to a wider public.

The award ceremony on 19  December at Binyanei Ha’Uma in Jerusalem was attended by 3,000 guests and officials. Guests were given a hand-out listing the biographies of sixty prominent Mizrahim. This will apparently be distributed to schools.

Being well-versed in Egyptian as well as in Israeli culture, Mrs Zamir, then president of the Israel-Egypt Friendship Association,  was invited to accompany the Israel president Ezer Weizman and his wife Reuma on their official visit to President Mubarak in Cairo. ” We created the easy atmosphere needed for a successful visit. We need to get know the Other, for to know him, is to love him.”

In a pre-recorded interview, Mrs Zamir, whose working career began at 16, recalled her role as PR director of the French Aeronautics Industries in Israel, OFEMA. “Following the Six Day War, we were furious that General de Gaulle had declared an embargo against Israel, stopping the delivery of the 50 Mirages-5 that Israel had bought from France. It had already paid for them, and our Israeli Airforce pilots had just completed their training in France.”

Together with Marcel-Dassault Aviation and the Israel military attache in France Moka Limon, OFEMA in Israel embarked on a clandestine mission to smuggle the 50 Mirage-5 fighter planes to Haifa from the French port of Rochefort. Thereafter, Israel began developing its own fighter aircraft, the Nesher, modelled on the Mirage 5.

“Embargo or not,  in Israel we never give up.  It was a huge responsibility but we broke it,’ Mrs Zamir said.

During the late 1970s, Mrs Zamir headed ALSAM, the Anti-Drug Abuse Association in Israel. She established a hostel for the rehabilitation of addicts, as well as programmes in schools to teach children to say no to peer group pressure.

In the 1990s, Mrs Zamir  chaired the Women Entrepreneurs’ organisation in Israel to help women break the glass career ceiling. “Thirty years ago,  women were asked,’what does your husband do? Today, they are asked: what do YOU do?” she commented.” There is much still to do, but  I am very proud of the achievements of this generation of young women.”

Her elation at receiving the award was tempered however, by regret that there were four women only among the 12 successful winners, just reaching the 30 percent threshold required by law for any Israeli public forum.