This Farhud story from Avner Ishak Shaib, as told to his daughter Oshra, appeared in this 2014 article  in +972 magazine by Orit Bashkin.  An academic at Chicago University and author of New Babylonians, Bashkin sees Iraqi Jews as ‘Arab’ nationalists, tends to downplay Nazi influence in Iraq and  highlights the role of Righteous Muslims and communists. But at least the readership of +972, accustomed to feel-good stories of Jewish-Muslim collaboration, was being exposed to the brutal facts about the Farhud. (With thanks: Leon) 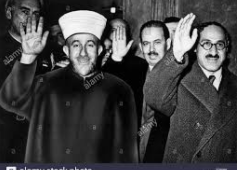 The Mufti of Jerusalem with Rashid Ali al-Gaylani

In 1941, about a month ahead of the Shavuot holiday, the rule of the British Mandate in Iraq was toppled by (Rashid Ali) al-Gaylani.

On Shavuot eve, rumors spread that the Iraqi army was defeated and that English had returned to rule Iraq. The Jews celebrated the holiday and the victory in the streets and in the synagogues. Baghdad was in a state of anarchy as the English had yet take power and Nazi rule was crumbling.

The poor people living on the other side of the Tigris took advantage of the situation and crossed the river and to rob, pillage and murder Jews. As news of the slaughter reached out neighborhood, we began to barricade our homes and prepare for self-defense: hot oil, stones, reinforcing the gates to the homes and more.

Some of the Arabs, which I call “Righteous Among the Nations” protected Jews while risking their own lives. ;My father returned that day from the market, told us about the terrible killing happening throughout the city in the Jewish neighborhoods, and said we must defend ourselves. We, who lived in the heart of the Muslim Arab neighborhood, climbed up on the roof and cried out for help. The aid came from our Muslim neighbor. With his encouragement, we jumped from our roof to his.

As this was happening, the neighbor threatened his mother with a gun that if she will turn us in instead of helping, he will shoot her. We stayed at the neighbor’s house for two days of horror and he protected us and provided us with water and food until the rage faded away. Our house was pillaged but we were saved.

The regime in Iraq always knew how to strike a balance and protect the Jews throughout Iraq and the same happened this time. (As protection was left to righteous individuals this statement seems to contradict the author’s story – ed) I was only 12 years old then but the event led me to later join the Jewish communist underground, believing that this movement and its ways will improve our lot. Later on, I joined the Zionist underground.