For more coverage like that below, please visit NYCParadelife.com

But as seen on the Facebook page of the New York coven (I use that word advisedly) of the anti-Israel so-called “Jewish Voice for Peace” the fascist left was also out and about, proving once again its intolerance for democractic values and free expression: 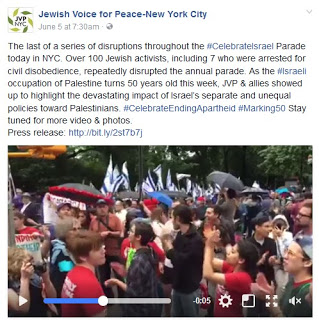 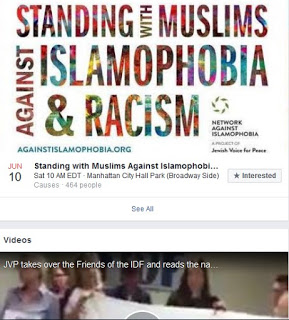 Last night in Australia, for instance, the popular conservative columnist Andrew Bolt was physically assaulted shortly after he launched a book about Donald Trump.

(The urbane Mr Bolt,naturally unhappy about having dye sprayed in his face, apparently attacked the bastards back, giving one a well-aimed kick in the unmentionables.)

He is an enfant terrible as far as the left is concerned, because he’s not afraid to speak his mind with such robust pieces as this, (“Britain has imported the start of a civil war”) written this week in the wake of the recent Islamic atrocities in the United Kingdom (in the latest of which, incidentally, two young Australian women have been confirmed dead):

‘The latest terrorist attacks in London show Britain has imported the start of a civil war.

Few police and journalists have wanted to admit this truth for fears of seeming racist. We have the same denialists ourselves.

But how can it be denied now? In March, a British-born Islamist killed five people with his car and his knife outside the British parliament.

Two weeks ago, the Islamist son of Libyan refugees murdered 22 people, many of them teenage girls, at a pop concert in Manchester.

Now at least three men have run down and stabbed people on and near London Bridge. One woman had her throat cut, and a witness reported one of the attackers, described as looking Mediterranean, shouted: “This is for Allah.”

To say this looks like the start of a civil war will be denounced by apologists as hyperbole.

But does anyone seriously think the Islamist attacks will finally stop with yesterday’s murders?

The UK government last month admitted Britain now had an estimated 23,000 jihadists on its streets — about the size of the army reserve.

Then there are the supporters, active or passive.

A face-to-face survey of British Muslims for the BBC last year found 4 per cent openly backed suicide attacks and other acts of Islamist political violence — which amounts to 100,000 Muslims in Britain today.

To deal with the threat, Prime Minister Therese May last month raised the terrorism threat level to extreme and deployed the army on the streets. Yet she still got this London Bridge massacre.

Looks like the start of a civil war to me.

Think what may now follow. Could some non-Muslims, enraged by the attacks and the refusal of the political class to properly protect them, one day respond with violence of their own?

God knows where it all will end.

But we do know where it started — with Britain opening the gates to mass immigration from the Middle East and Africa, while the political class screamed down anyone who dared object….’