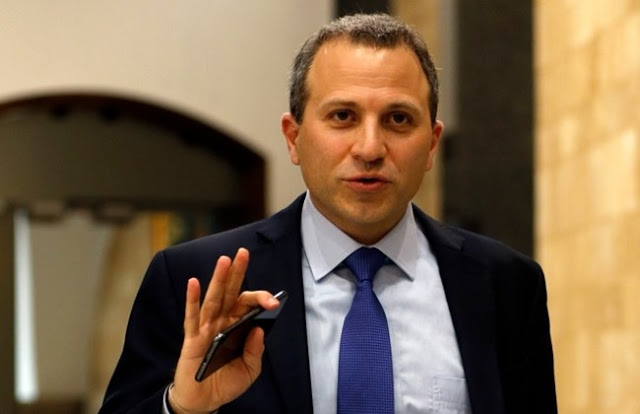 In Al Monitor (quoted in The Daily Star):


Caretaker Foreign Minister Gebran Bassil said that the U.S.’s decision to cut UNRWA funding will be discussed during meetings at the U.N. General Assembly in New York, and that he didn’t oppose conditioned peace with Israel.

In an interview published Monday with the United States-based Al-Monitor news website, Bassil said that the cuts were one of the ways of preventing the Palestinians in Lebanon from returning to their homeland and staying there.

The cuts “have a very heavy political weight on the idea of keeping the Palestinians in Lebanon because, you know, this is a step forward to, one, deprive them from the right to return and, two, to somehow take the title of refugee and turn them into integrated people in our country,” Bassil said.

But Bassil also has some interesting things to say about Syrian refugees:

As Lebanon’s foreign minister, Gebran Bassil has in recent months taken steps to quicken the return of Syrian civilians who in the past seven years crossed the border to flee civil war.

Speaking to The National, Mr Bassil hesitates to call such Syrians refugees, instead describing them as “migrants” and “displaced”.

“Lebanon does not accept Syrians to be refugees, not one of them,” he said on the margins of the United Nations General Assembly in New York.

His argument is that Lebanon is not a signatory to the Convention Relating To The Status Of Refugees, a UN multilateral treaty agreed in 1951, and thus is not required to grant refugee status.

He is also sensitive to the need and some public desire for repatriation of the more than one million Syrians in Lebanon because of the war.

“It’s stipulated in our constitution, it’s related to the existence of the country that’s based on a certain equilibrium and balance, you cannot all of a sudden introduce 50 per cent of its population to the country.”

Lebanon doesn’t legally consider Palestinians to be refugees – but it happily calls them refugees when it is convenient.

Isn’t it funny that no one is calling Lebanon racist for deciding on its ethnic character in its constitution?

It gets even worse:

On 21 March – Mother’s Day in Lebanon and a little more than a month before the country’s first parliamentary election in nine years – Foreign Minister Gebran Bassil announced he would submit an amendment to the country’s nationality law that would give Lebanese women married to foreign men the right to transfer their nationality to their children.

The initiative “applies the principle of equality between all Lebanese women and men”, Bassil said.

But there is one significant exception in the minister’s proposal: the right would not extend to Lebanese women married to citizens of “neighbouring countries”, meaning Syrians or Palestinians. Bassil said he would also seek to remove the right of Lebanese men to confer citizenship to their Syrian or Palestinian wives and the children of those marriages.

This wonderful paradigm of a liberal foreign minister spoke at Princeton University this week, where he blames ISIS and Israel for forcing Lebanon to have discriminatory citizenship and refugee laws.

Yet rock stars and other artists happily play in Lebanon. There is no BDS movement against Lebanon. Racist laws and accepted as part of the reality and the world shrugs.