Yesterday Anne Frank would have celebrated her 90th birthday. Both Jeremy Corbyn and Laura Murray held her aloft. Clearly a message went out from Corbyn HQ to use the Anne Frank anniversary for a little pro-Jewish tokenism. Dead Jews are always easy to commemorate, it is the living ones that Corbyn’s people have so much difficulty with.

The quote Corbyn used to politicise Anne Frank was particularly harsh – he chooses the line where she writes:

“I keep my ideals, because in spite of everything I still believe that people are really good at heart.”

It is only a partial quote and it is often used out of context as people strip from the meaning of the passage all the doubt and fear contained within. Read today the piece is utterly tragic, because we know how Anne’s story ends. This was one of the final entries in her diary. Penned on the 15th July 1944, Anne was just weeks away from capture and deportation. Anne Frank would not live to see another summer.

So how should we read Corbyn’s use of the message? The leader of a party embroiled in a deep antisemitism crisis and in a bitter struggle with British Jews, using Holocaust victims for tokenism – just what is he trying to tell us? Jeremy Corbyn is using Anne Frank to spit in our faces.

Jeremy Corbyn referenced Anne Frank during PMQs. He spoke of the Holocaust and then without faltering he welcomed Lisa Forbes, the MP embroiled in antisemitism scandal to the House. Laura Murray also pushed the Anne Frank message. This time on Twitter:

Murray was part of Corbyn’s inner circle and was appointed as the ‘head of complaints’. This puts Murray as the lead in the response team on antisemitism. Murray is not without controversy. According to the Times, she stands accused of stopping the suspension of Patricia Sheerin. Those who read this blog know Sheerin well and her antisemitic posts were exposed in my reports. Sheerin was later arrested, being questioned over ‘publishing or distributing material likely to stir up racial hatred‘. Murray is also facing a libel action from Countdown presenter and antisemitism campaigner Rachel Riley.

It was sickening to see Murray and Corbyn deploy one of the most famous Holocaust victims in an act of tokenism to Jewwash the Labour party. I said so and linked to Laura Murray’s original tweet when I made my comment:

And then something strange happened. Several of my followers said they couldn’t see the Laura Murray tweet. The reason: she had blocked them. I dug a little further. The list of people blocked by Laura Murray seems long. It also includes many of the key antisemitism campaign accounts like GnasherJew, Euan Philipps & Emma Picken. These are just a few: 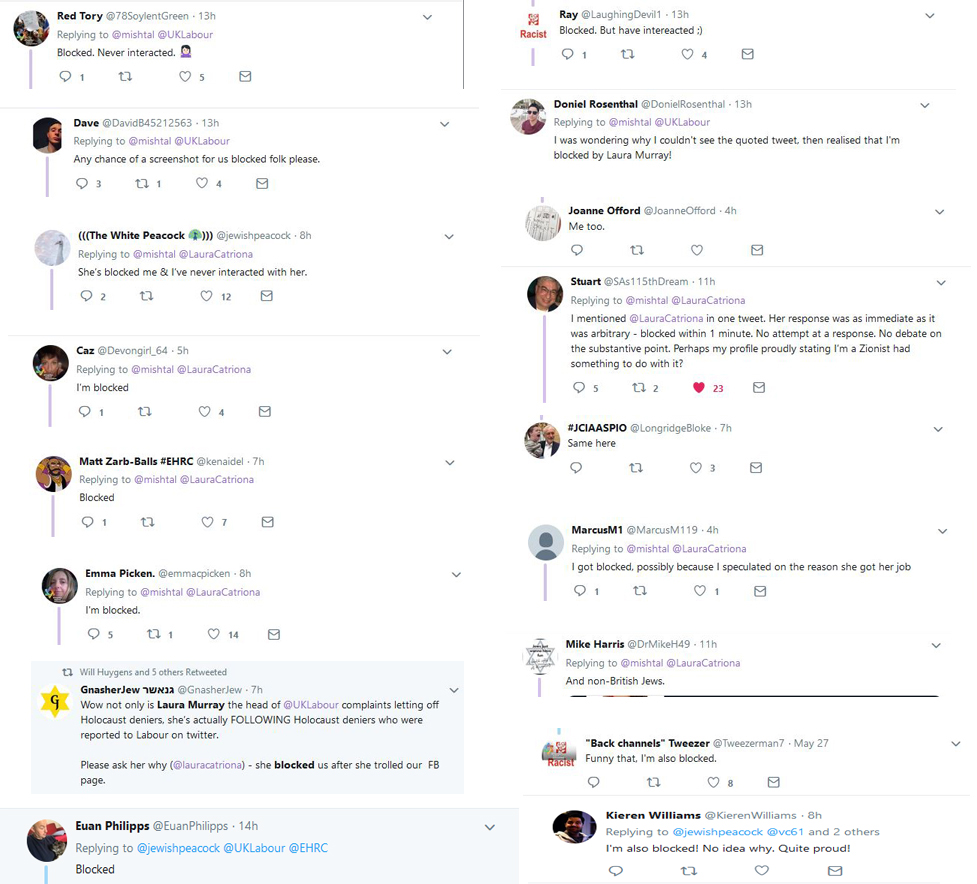 This is astonishing. Laura is meant to be the head of complaints for Labour, the person who is paid to handle complaints of antisemitism in the party, yet she actively blocks many of those on the front line of the battle. As so many of my followers had indicated they were blocked, I publicly suggested Laura Murray may have used one of the ‘anti-Zionist block lists’ readily available on the platform:

Laura Murray blocks for what?

Laura swiftly responded to my tweet. She categorically denied the ‘block list’ suggestion. She also turned herself into the victim. It isn’t the Jewish people of the UK who have the abuse problem, it is Laura Murray:

Laura has every right to block abusers. Twitter can be a hostile and toxic environment. Laura claimed she had blocked people who were ‘regularly abusive’ towards her. So I checked and I looked at some of the interactions. Take Stuart. He tweeted ONCE to Laura Murray:

And here we run into deeper trouble. Mike didn’t even talk about Laura. What he did was talk to a third party and reference Corbyn’s fondness of Hezbollah and association with Holocaust deniers in places such as Palestine Live. Both proven. Why did she block Mike after this? Is suggesting Corbyn has issues with antisemitism a blockable offence by the person in charge of the antisemitism complaints in the party?

The result of these checks is really disturbing. @Longridgebloke also seems to have had no visible exchange with Laura Murray on Twitter. Nor does @tweezerman7.

@Kenaidel had two tweets in which Laura Murray was tagged, neither of which was really abusive. @Devongirl_64 had one:

@donielrosenthal also only had one exchange. Critical, but hardly abusive. @solyentgreen made two tweets in which Laura Murray was tagged. Neither addressed Laura directly, but rather suggested the party is racist. Keiren Williams only asked Murray a question in the one single tweet he sent in her direction.

Laura Murray – this does not seem true

Which means we have a problem, because when Laura Murray responded to my tweet, she said she hasn’t used block lists and only ‘sometimes blocks individuals who are regularly abusive‘ towards her on Twitter.

This is clearly not the truth. It simply doesn’t explain how those who have *NEVER * appeared to have even tagged Laura, have been blocked. We can also see posts that are clearly not abusive, that resulted in people being blocked. Nowhere here is there evidence of the ‘regular abuse’ that leads Laura Murray to ‘sometimes’ block people. Perversely, as someone who is meant to be dealing with antisemitism, Laura Murray seems to engage in a strategy of blocking those fighting antisemitism. It is difficult to believe that some type of list has not been deployed considering some of these people have never interacted with her. Given the importance of her function, this is something that needs to be urgently looked at and addressed.

Which leads to another problem. And that is the abuse I received because she responded to me. Laura Murray responded to my tweet and peddled a fiction. In doing so she set Corbyn’s twitter thugs on me. The rest of my day was spent deeply immersed in so much hate that @gnasherjew felt they could use these responses as an example of abuse:

One of the responses worth highlighting was this.

It shows the twisted logic of the Corbyn clan. Put aside the ageism and false accusation of racism. Consider the central meaning. I ‘harass’ a professional woman who performs a political function by questioning or criticising her. For this I am a ‘misogynist’. What a low opinion of women this ‘Saeen’ clearly has, that they are so weak and feeble they are unable to deal with a non-abusive comment. Ironically, he calls me the misogynist.

But there is nothing funny about the abuse I received:

Those are just a few examples of the hundreds of abusive comments directed towards me because Laura Murray felt the need to distort the truth. She began the day by using Anne Frank to Jewwash. She ended it by dogpiling an antisemitism campaigner in an attempt to deflect attention away from what has become evident. Laura Murray blocks those very people she would be paying attention to if she was even partially interested in fighting antisemitism.

Murray is part of Jeremy Corbyn’s circle. Should we have expected anything less? Whether she likes it or not, I am clearly the victim of a high level of antisemitic abuse – by any definition. I have been a high-profile target for years. Yesterday Laura Murray was responsible for sending some more in my direction. I do have a thick skin and although incidents like this can get me down, it is rarely for long. The battle is a constant one. There is no ‘quiet period’, there are merely high tides and higher tides. I will rest, sleep and be ready for more. I am a British Jew and Corbyn’s circle are thirsting for power – I have no choice but to fight.

This blog is unique and I engage in deep undercover research. I expose antisemitism and address the false narrative spread from anti-Israel activism. The work is fully independent and many key stories on antisemitism have first been exposed by this research on this site. My work has led to major investigations and political resignations. My findings have also challenged some of the core false narratives that attempt to delegitimise Israel. I was recently named as one of the J100 (‘top 100 people positively influencing Jewish life’) by The Algemeiner. If you can, please consider making a donation.

You can make PayPal donations using the donate button above.

I have also opened a Patreon page. This is another way to donate a small amount monthly to support my work. Every contribution is both needed and truly appreciated.

The post Laura Murray, Corbyn’s trolls, a few porkies and a whole lot of hate appeared first on The David Collier blog.