On Sunday, after I noted that as of Friday the two New Jersey towns with the highest religious Jewish populations also had the highest number of coronavirus cases, I tweeted that I was very concerned about what would happen in Lakewood this week: 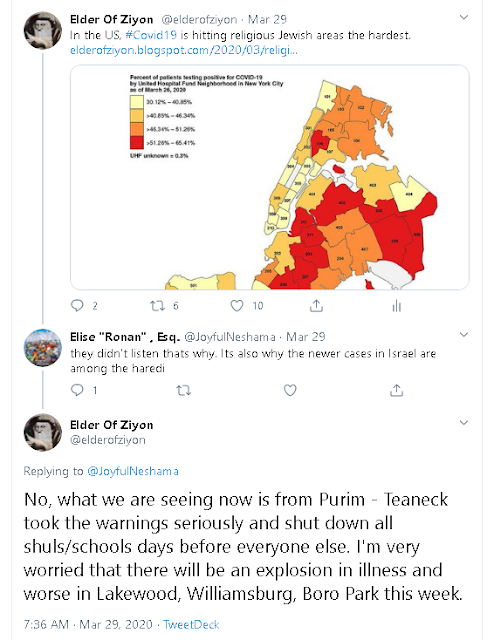 While the vast majority of religious Jews in Lakewood have been taking the social distancing guidelines seriously, there have been reports up through yesterday of some Jews ignoring the rules and continuing to hold gatherings – yesterday for a bat mitzvah on a lawn and a school bus filled with kids caught traveling, and another school caught with 35 people inside.

Teaneck, on the other hand, has been – to all reports – taking the rules very seriously since March 12.

So, sadly, Lakewood has just zoomed past Lakewood and other New Jersey towns with a hundred new cases in just 24 hours.

Here is the chart mapping five communities with significant numbers of Orthodox Jews – Toms River is essentially a suburb of Lakewood and Clifton a suburb of Passaic, with the Jewish community traveling in the same social circles. 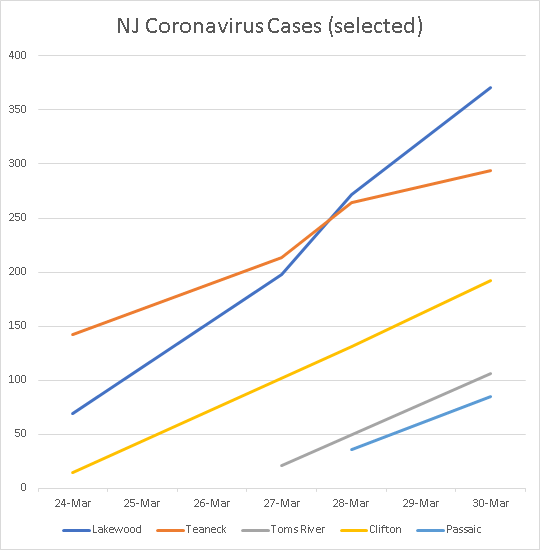 Lakewood has been more lax and we are seeing the results now – and they will get much worse in the future. The Lakewood incidents are fueling a huge increase in antisemitism online, so much so that the governor of the state has denounced it along with anti-Asian bigotry.

Jews are dying today because too many on their community laughed off the risk since it became apparent that shuls and schools would have to close.

Within days, it will become common knowledge that the hotbed of coronavirus in NJ is in a town most people never heard of that is filled with religious Jews. The very name Lakewood, instead of being synonymous with Torah learning as it is now, will become associated with the few Jews who decided that they can ignore the government and their own religious leaders, and thereby endanger everyone else.

This minority that think they are above the rules is hurting all religious Jews in the United States. It is a massive chilul Hashem.