The 16th Kina of Tisha B’Av refers to the tragic story of the Romans, after destroying the Temple, filled up a ship with 400 Jewish boys and girls who would be forced to become prostitutes in Rome. The children all chose to throw themselves overboard to drown rather than be subjected to that.

The commentary I am reading now by Rav Joseph B. Soloveitchik said that there was a similar story about a group of Jewish schoolgirls in Warsaw who were also being readied to be raped by Nazi soldiers and who likewise chose suicide. 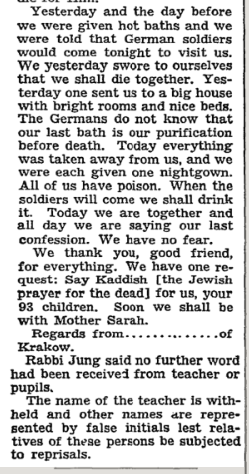