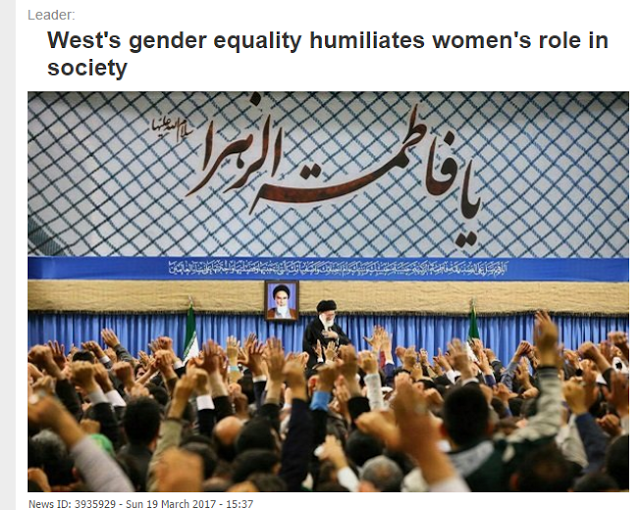 Addressing a gathering of religious eulogists on Sunday morning on the occasion of anniversary of birth of Hazrat Fatimah Zahra (SA) as the National Women’s and Mothers’ Day, Leader of the Islamic Revolution Ayatollah Seyyed Ali Khamenei deemed actions of that great lady of Islam both is the role of a true leader as well as a great wife and mother as a perfect role model for Muslim women.

He underscored that raising certain topics in support of women’s rights will actually undermine their position reiterating that exploiting women as means of pleasure and joy in the West is most likely a Zionist conspiracy aimed at destroying human society.

“Unfortunately, sometimes inside the country and in some Islamic environments, tasks and expectations are ascribed to women which in fact collapse and humiliate their roles.”

“Today, Western scholars and those who pursue issues like gender equality all regret their actions for the corruption they caused,” highlighted the Leader expressing hope that views of those who raised similar issues inside the country were not based on the Western misconception.

Of course, in Iran women are not allowed to show their hair in public, married women cannot leave the country without their husband’s permission, a woman’s testimony is worth half that of a man and men can marry up to four wives.  Anyone against that is of course part of the Zionist plot to destroy human society.

Oh, and Iran is a world leader in human trafficking of women for sexual exploitation:


The Islamic Republic of Iran is a transit and destination country for trafficking in person as well as a country of origin for victims of trafficking. The Iranian state has always faced human trafficking issues due to geographical location and lack of measures by the Iranian authorities to prevent trafficking and to develop strategies that address the root causes and risk factors. The issue has been invisible by lack of official statistics and estimations, freedom of expression, freedom of associations and free press. In December 2013 the semi official Iranian Student News Agency (ISNA) quoted Iran’s passport issues police department chief, General Mahmoud Sadeghi: “We do not deny girls’ trafficking to Arabian countries but the number is not considerable” at an INTERPOL Regional Operational Workshop on “Combating Trafficking in Human Beings” in Tehran. At the same event Homayun Hashemi, the head of Iran’s government-run Social Welfare Organisation, was quoted: “Certain statistics have no positive function in society; instead, they have a negative psychological impact. It is better not to talk about them.”

Women and girls are trafficked for sexual exploitation domestically and externally into Persian Gulf countries, Pakistan, Afghanistan, more limited to European and Asian countries as well as more recently to China. Additionally Afghan, Pakistani, Eastern Europeans, Chinese and Iraqi women are trafficked into the I.R. Iran.

There are specific vulnerability factors for women and girls of becoming trafficking victims in the I.R. Iran such as poverty, drug addiction, sexual abuse, domestic violence, pre-arranged marriages as well as divorce as case studies of “Runaway Girls in Social Emergency and Rehabilitation Centre of Shiraz, Iran” specifies. In recent years also the number of girls as well as boys on the streets has increased.

The good news is that Khamenei is clearly afraid of rights that Iranian women are demanding and how his eighth-century society looks to the world. When he calls something “Zionist” that is a last ditch effort to demonize something that even most Iranians know is inevitable.