No matter what atrocities are happening in the world, Ken Roth of Human Rights Watch feels compelled to post at least one anti-Israel tweet a day.

The UN “expert” is Michael Lynk, the UNHRC’s “Special Rapporteur on the situation of human rights in the Palestinian Territory occupied since 1967.” 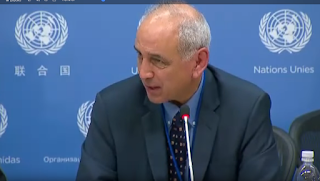 Although we’ve seen Lynk’s bias before, I just found out that in 2009, he claimed Israel was guilty of “ethnic cleansing” of Palestinians and havily implied that Israel itself is a mistake that must be erased.
In a report called “Peace, Human Rights, and the Rule of Law: Canada’s Role in the Middle East” issued by the Group of 78 Annual Policy Conference, September 25-27, 2009,” Lynk’s presentation is paraphrased:

He used to think the critical date in the Palestinian-Israeli conflict was 1967, the start of the occupation. Now he thinks the solution to the problem must go back to 1948, the date of partition and the start of ethnic cleansing. Canada’s role in partition was pivotal with Justice  Ivan Rand, Lester Pearson and Elizabeth MacCallum (though she privately warned against it). What followed from this point needs review and needs to inform Canadian foreign policy going forward. Many increasingly feel that partition was a mistake.

Sure, it makes sense for the UN to hire an “expert” on Israel who thinks Israel shouldn’t exist and never should have existed.