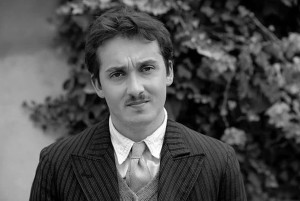 Bialystock Ghetto, August 13 – Authorities mandated this week that the Jews of this city elect delegates to a council that will represent the community in its dealings with the German occupation administration, sparking a campaign by several dozen prominent Jewish figures to serve on the council, with one ambitious man boasting that he possesses unparalleled abilities in pointless efforts to delay, soften, or otherwise thwart in some measure the inevitable genocide on the horizon.
Mojsze Ufnik, 30, sought today to launch his candidacy for the Judenrat, the Nazi-approved local Jewish leadership council, the body that in the ensuing months and years will play a key role in the rigged game of making vain attempt after vain attempt to shield at least some of the Jews under its aegis from falling victim to Nazi policies of slave labor, summary execution, mass rape, deportation, and other depravities. Ufnik, scion of a prosperous textile manufacturing family, aims to wield his considerable influence in the community to cushion them from their inescapable doom.
“I’m excited for this opportunity for public service,” he pronounced to an unenthusiastic crowd of Six Warszawska Street, four of whom bear some family relation to him. “We all hold my fellow candidates in high esteem, and I share our collective confidence in their willingness to do their best, but my best will be the best best. I guarantee that. No one will achieve better results than I in failing to prevent the wholesale isolation, dehumanization, exploitation, oppression, degradation, and eventual massacre of our community in the coming months and years.”
“If the Judenrat will toil in vain,” he chanted, “it might as well be led by someone vain!”
Nazi intentions called for the existing Jewish community leaders to gain positions on the Judenrat, to lend the council authority among Jews in might not otherwise enjoy, but here, as in many other locales under SS control, the rabbis and other leaders have for the most part refused to grant the Judenrat the legitimacy that such participation would command; they have recognized that the council’s role and capacity, as conceived and constructed by the Nazis, is to smooth, not disrupt or delay, the enslavement and extermination of the Jews under Third Reich rule. Others, such as Mr. Ufnik, see opportunity for social or political advancement, however short-lived it might prove.
“Might as well be on the right side of the nepotism, cronyism, favoritism, and corruption that always goes along with scarcity,” he explained.