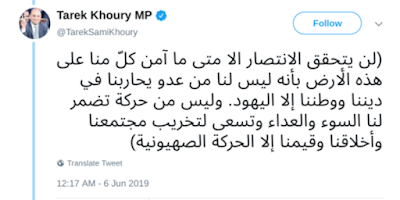 Tarek Khoury, a member of Jordan’s parliament, tweeted a thread where he stated that peace with Israel is an illusion, and that Israel only accepts peace to swallow land that doesn’t belong to it and to prime itself to steal more land. (Essentially he is accusing Israel of doing what the PLO explicitly stated it would do in 1974, to take all of Israel in phases, a position it never abandoned.)

In the middle of the thread, Khoury wrote:

“Victory is achieved only when each of us believes on this land that we have no enemy who fights us in our religion and our homeland except the Jews.”

Not Zionists, not Israelis – Jews.