The headline in The New York Times shows how badly that newspaper is biased: 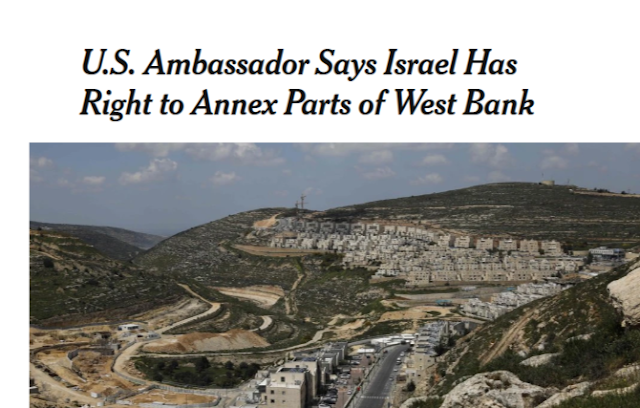 This isn’t just the headline, which could be written by a different editor with his or her own bias. The lede of the article says:

Israel has a right to annex at least some, but “unlikely all,” of the West Bank, the United States ambassador, David M. Friedman, said in an interview, opening the door to American acceptance of what would be an enormously provocative act.

Since the interview with Ambassador David Friedman was an exclusive to The New York Times, who is going to disagree that this is what he said?

Except that, he didn’t.

His words were: “Under certain circumstances, I think that Israel has the right to retain some, but not all, of the West Bank.”

Later on the article says:

He accused the Obama administration, in allowing passage of a United Nations resolution in 2016 that condemned Israeli settlements as a “flagrant violation” of international law, of giving credence to Palestinian arguments “that the entire West Bank and East Jerusalem belong to them.”
“Certainly Israel’s entitled to retain some portion of it,” he said of the West Bank.

This does not mean unilateral annexation. He didn’t use the word “annex.” . It means that the 1949 armistice lines are not the legal boundaries of Israel and that UN Resolution 242 entitles Israel to territory in the West Bank under any permanent agreement.


Friedman is correct and his critics are wrong.

I know, because I participated – albeit in a small way – in the drafting of United Nations Security Council Resolution 242 back in 1967, when Justice Arthur Goldberg was the United States Representative to the United Nations. I had been Justice Goldberg’s law clerk, and was then teaching at Harvard Law School. Justice Goldberg asked me to come to New York to advise him on some of the legal issues surrounding the West Bank.

The major controversy was whether Israel had to return “all” the territories captured in its defensive war against Jordan, or only some of the territories.

The end result was that the binding English version of the United Nations Resolution deliberately omitted the crucial word “all,” and substituted the word “territories,” which both Justice Goldberg and British Ambassador Lord Caradon publicly stated meant that Israel was entitled to retain some of the West Bank.

Moreover, under Resolution 242, Israel was not required to return a single inch of captured territory unless its enemies recognized its right to live within secure boundaries.

Friedman is right, therefore, in these two respects: (1) Israel has no right to retain all of the West Bank, if its enemies recognize its right to live within secure borders; (2) Israel has “the right to retain some” of these territories. The specifics – the amount and location – are left to negotiation between the parties.

When asked explicitly about annexation, Friedman did not say anything at all:

The absence of a condemnation does not equal support. Friedman did not say a single thing against US policy.

Reporters tried to play “gotcha” with the State Department spokesperson, who didn’t say that Friedman said anything wrong:

State Department spokesperson Morgan Ortagus said the administration’s position on the West Bank has not changed, despite Ambassador David Friedman’s comments to The New York Times that “Israel has the right to retain some, but unlikely all, of the West Bank.”
Speaking to reporters Monday, Ortagus said that “the administration’s position on the settlements has not changed. Our policy on the West Bank has not changed.”
Asked what the US position on settlement activity is, a State Department official cited President Donald Trump, saying that “as the President has said, while the existence of settlements is not in itself an impediment to peace, further unrestrained settlement activity doesn’t help advance peace.”

Of course, Friedman didn’t say anything about whether the settlements were legal according to US policy in the interview as published.

Friedman is characterized in the media as a pro-Israel cowboy who ignores US policy in the region. He is undoubtedly pro-Israel and pro-settlement in his own opinion, but he did not say one word that contradicted US policy, nor did he say a word about supporting unilateral annexation.

This is all media bias by the New York Times and picked up by scores of reporters who do not have the ability to independently evaluate an official’s statements and uncritically accept the false interpretation of the NYT.