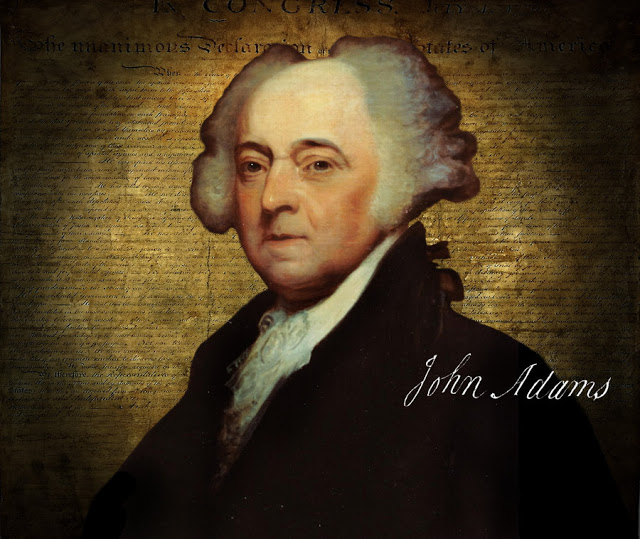 A Jerusalem Post story about the second president of the United States, John Adams, prompted me to look up the fuller context of two major quotes from him.

Adams, who was born on October 30, 1735, in Braintree, Massachusetts, grew up in a household based on Puritan values. The Puritans believed themselves to be like the Israelite’s fleeing Egypt, wandering into the vast and unknown wilderness and reaching the promised land of the New World.
As their guide, they used the Bible, adopting biblical customs, established biblical codes, such as observance of the Sabbath, and gave their children Hebrew names.

I will insist the Hebrews have [contributed] more to civilize men than any other nation. If I was an atheist and believed in blind eternal fate, I should still believe that fate had ordained the Jews to be the most essential instrument for civilizing the nations …

They are the most glorious nation that ever inhabited this Earth. The Romans and their empire were but a bubble in comparison to the Jews. They have given religion to three-quarters of the globe and have influenced the affairs of mankind more and more happily than any other nation, ancient or modern.

Note that Adams, like most people throughout history, naturally thought of Jews as a nation, not merely a religion.

And he made that even more clear in this 1819  letter to Mordecai M. Noah:

I have to thank you for another valuable publication your travels in “Europe
Africa” which though I cannot see well enough to read. I can hear as well
ever & accordingly have heard read two thirds of it & shall in course hear all
the rest. It is a magazine of ancient & modern learning of judicious observa-
tions & ingenious reflections. I have been so pleased with it that I wish you
had continued your travels-into Syria. Judea & Jerusalem. I should attend
more to your remarks upon those interesting countries than to those of any
traveller I have yet read. If I were to let my imagination loose I should wish
you had been a member of Napoleons Institute at Cairo nay farther I
could find it in my heart to wish that you had been at the head of a hundred
thousand Israelites indeed as well disciplined as a French Army-& marching
with them into Judea & making a conquest of that country & restoring your
nation to the dominion of it. For I really wish the Jews again in Judea an
independent nation. For I believe the most enlightened men of it have
participated in the ameliorations of the philosophy of the age, once restored
to an independent government & no longer persecuted they would soon wear
away some of the asperities & peculiarities of their character & possibly in
time become liberal Unitarian Christians for your Jehovah is our Jehovah
your God of Abraham Isaac & Jacob is our God. I am Sir with respect
esteem your obliged humble servant.