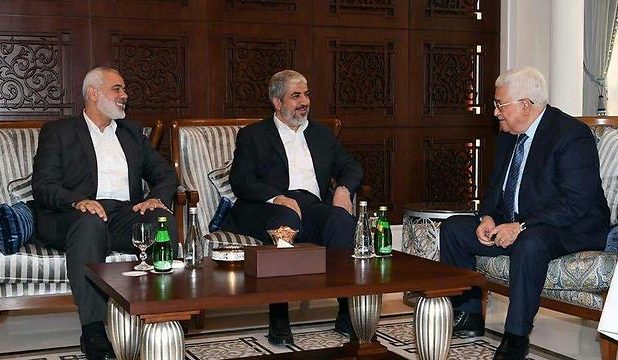 Palestinian Authority President Mahmoud Abbas has failed to resolve his stand-off with Egypt or Hamas, according to senior officials who spoke to Middle East Eye.

The officials told MEE the recent meeting between Abbas and top Hamas leaders in Doha made no progress toward ending the long-running split between the two camps.

Dr Khalil al-Hayeh, a member of Hamas’s political bureau, said that Abbas “clung to his old positions and showed no flexibility in the meeting”.

Which is exactly what I wrote on Friday.

Arab media confirms that both sides didn’t show any flexibility.


The relationship between President Abbas and Egypt’s leader has deteriorated in the last couple of months, with Abbas decrying what he has called “Egyptian intervention in Palestinian affairs”.

The official said Egyptian intelligence officers made phone calls to Palestinian study centers in Ramallah and tried to persuade them to participate in the conference in Cairo.

“That was a stark intervention in our affairs,” said the official, who spoke on condition of anonymity.

Dahlan enjoys the regional support of the United Arab Emirates, Egypt and Jordan. UAE leaders have also tried to persuade Saudi Arabia that Dahlan is a strong potential successor to octagenarian Abbas.

Abbas plans to hold a Fatah party convention by the end of November, which he is expected to use to block Dahlan’s return.

Dahlan does seem to be an important if missing player in all of this drama.

Times of Israel, while making more out of the meeting than it appears to have been, notes the background:

So what — or, rather, who — has led Abbas straight into the arms of the Muslim Brotherhood, and maybe even into those of Hamas, just days after a high-ranking Hamas official in Gaza called him a traitor?

The answer is simple: Mohammad Dahlan. This former high-ranking Fatah official, who has been challenging Abbas for several years, succeeded this week in areas where even Hamas has failed. He managed to get Cairo on his side in the fight against Abbas and proved how weak and shaky Abbas’s status is in the Arab world.

In addition, Dahlan organized a series of demonstrations in the West Bank against the Palestinian Authority and Abbas — to which hundreds of Fatah activists showed up. So Abbas, who has taken some hard hits in recent weeks (including for attending the funeral of Shimon Peres, in case anyone forgot), caught on to the conspiracy being wrought against him in Cairo, Abu Dhabi (where Dahlan lives), and even Saudi Arabia (which recently cut back its aid to the PA). So Abbas decided to approach the patrons of the Muslim Brotherhood and perhaps bring about a reconciliation with Hamas — mainly with the leadership of the group’s political wing abroad.

Why approach Hamas leaders in Qatar and not in Gaza?

One reason is that the high-ranking members of Hamas in Gaza seem to be collaborating with Dahlan, of all people. This means that the conventional division into various camps (pragmatic Sunnis, the Muslim Brotherhood, Shiites, jihadist Sunnis) created in recent years is once again melting before our eyes. The new Middle East transformed long ago into a juicy and tragic political-diplomatic soap opera, and we cannot predict where the plot of its next episode is headed.

Yet in the end…nothing happens.