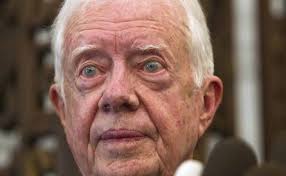 Jimmy Carter wrote yet another tendentious op-ed for, who else, the New York Times.

The first paragraphs show yet again that he is simply a liar.

That prospect is now in grave doubt. I am convinced that the United States can still shape the future of the Israeli-Palestinian conflict before a change in presidents, but time is very short. The simple but vital step this administration must take before its term expires on Jan. 20 is to grant American diplomatic recognition to the state of Palestine, as 137 countries have already done, and help it achieve full United Nations membership.

Back in 1978, during my administration, Israel’s prime minister, Menachem Begin, and Egypt’s president, Anwar Sadat, signed the Camp David Accords. That agreement was based on the United Nations Security Council Resolution 242, which was passed in the aftermath of the 1967 war. The key words of that resolution were “the inadmissibility of the acquisition of territory by war and the need to work for a just and lasting peace in the Middle East in which every state in the area can live in security,” and the “withdrawal of Israel armed forces from territories occupied in the recent conflict.”

The agreement was ratified overwhelmingly by the Parliaments of Egypt and Israel. And those two foundational concepts have been the basis for the policy of the United States government and the international community ever since.

The words “key words” links to a UN publication that also says that there were two main points to the resolution – but not the ones Carter says.

The resolution stipulated that the establishment of a just and lasting peace should include the application of two principles:
✹ Withdrawal of Israel armed forces from territories occupied in the recent conflict; and
✹ Termination of all claims or states of belligerency and respect for and acknowledgement of the sovereignty, territorial integrity and political independence of every State in the area and their right to live in peace within secure and recognized boundaries free from threats or acts of force.

The part that Carter quotes about “the inadmissibility of the acquisition of territory by war” was not from the operative part of the resolution, but from the preamble – which has no legal standing. And the part that he ignores is the part that was meant to say that the final borders would be the result of negotiations, not the 1949 armistice lines.

So Carter spins a double lie: one is that he elevates a meaningless preamble phrase to importance it doesn’t have, and he ignores the phrase that insists that Israel’s neighbors (which do not include the Palestinians, who are not mentioned at all in the resolution) allow Israel to have secure borders, which it most certainly didn’t have before 1967. That is why the language doesn’t call for Israel to withdraw from all territories – but to create a border that would allow it to be secure from attack, borders that would be negotiated with its neighbors.

This is what 242 says. The drafters of the resolution from the US and UK are unanimous in this interpretation. Carter, however, pretends that UNSC 242 says that all Israeli communities beyond the artificial 1949 armistice lines – that were never secure nor recognized – are illegal. And he is including the Jewish quarter of Jerusalem! (Carter counts all Jerusalem residents across the Green Line to be living there illegally.)

242 also says that, even if you do recognize a new entity called “Palestine” in part of the territories, that state must acknowledge Israel’s right to live in peace. Given that Fatah, which dominates the PLO which controls the Palestinian Authority, explicitly says that violence is an acceptable form of “resistance,” clearly Israel’s Arab neighbors do not accept that clause that is indeed one of the main parts of 242 that Carter ignores.

There’s plenty more that Carter twists in the op-ed, but really, when he lies as far as what the two main points of 242 are, he’s already proven to be a liar.

After January 20, we will have another ex-president who will have free reign to make up anti-Israel lies in op-ed pages.

The New York Times yet again shows that it allows anti-Israel op-ed writers to not be subject to basic fact checks.