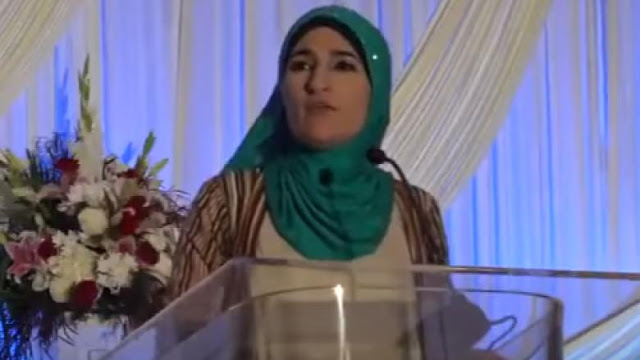 Linda Sarsour recently stirred up a great deal of attention when she gave a speech where she called for “jihad” against Donald Trump but made it clear that she was not referring to anything violent. As reported in the Washington Post:

In her speech, Sarsour told a story from Islamic scripture about a man who once asked Muhammad, the founder of Islam, “What is the best form of jihad, or struggle?
“And our beloved prophet … said to him, ‘A word of truth in front of a tyrant ruler or leader, that is the best form of jihad,’” Sarsour said.
“I hope that … when we stand up to those who oppress our communities, that Allah accepts from us that as a form of jihad, that we are struggling against tyrants and rulers not only abroad in the Middle East or on the other side of the world, but here in these United States of America, where you have fascists and white supremacists and Islamophobes reigning in the White House.”

As Lee Smith noted, Sarsour knew exactly what she was saying by using the word “jihad” here, to paint those who are offended at the term as bigots.

I am a bit more interested in her story about Mohammed’s use of the term.

The source for that story is a fairly obscure hadith, Musnad Aḥmad 18449. Musnad Ahmad ibn Hanbal merits only a small mention in Wikipedia; although the author was an early influential Muslim theologian, the veracity of his hadiths are sometimes suspect by other Muslims.

More interestingly, there is a much more famous story about Mohammed and the definition of jihad (from the English translation of the Book of Jihad):

A man asked the Prophet: What is Jihad? He (s.a.w)
replied: “To fight against the disbelievers when you
meet them (on the battlefield).” The man asked: “What
kind of Jihad is the highest?” He (s.a.w) replied: “The
person who is killed whilst spilling the last of his blood”

Yet another quote from Mohammed on jihad is this one:


The Messenger of Allah was asked about the best jihad. He said: “The best jihad is the one in which your horse is slain and your blood is spilled.”

Wikipedia’s article on Jihad notes that while the use of the word to refer to non-violent actions was used in some very early sources, its use was often unambiguously violent:


Of the 199 references to jihad in perhaps the most standard collection of hadith—Bukhari—all assume that jihad means warfare.[31]

Sarsour’s cynical use of “jihad” is being amplified by her Muslim admirers such as the equally deceptive Dalia Mogahed who tweeted “What’s #YourJihad? Maybe it’s working for an America for All. Maybe it’s just loving your kids. #IStandWithLinda.”

This is a deliberate effort to water down the meaning of the word “jihad” to make it appear to be a liberal value. In no way is that true; even the expansive definition of “greater Jihad” refers to striving or struggle to be a better person, “loving your kids” should not be a struggle for most people.

Sarsour, taking advantage of the controversy, tweeted that “My work is CRYSTAL CLEAR as an activist rooted in Kingian non-violence.” It would be most illuminating to ask her is she is therefore against jihad as holy war altogether, which everyone agrees is one of its meanings. As an avowed believing Muslim, Sarsour cannot possibly say that. It would also be interesting to ask Sarsour if she condemns the use of the word “jihad” by Palestinian terror groups like Islamic Jihad, let alone if she unequivocally condemns their use of violence, since she she claims to be so “Kingian.”

There is literally no way Sarsour could condemn Palestinian jihad or the concept of violent jihad altogether. Those are bound up in her identity as a Muslim and as a descendant of Palestinians who define Israel as a place that must be destroyed by any means possible.

In this sense, the word “jihad” can be loosely compared to the word “crusade.” The analogy is far from exact, because the current use of “crusade” in English vernacular is wholly outside of any Christian religious connotation except by scholars, while “jihad” is clearly used by millions of ordinary Muslims today to refer primarily to holy war.  Yet when the word “crusade” is used today, Muslims take offense – how dare the speaker invoke a word that has such negative connotations to Muslims? But the word “jihad” is, by any yardstick, much more offensive, and Sarsour is deliberately using it to demonize her opponents.