TOP NEWS
http://jewishrefugees.blogspot.com/2019/03/jews-owned-more-than-200000-dunams-in.html
With thanks: Hadar and Yisrael

President Trump’s endorsement of Israeli sovereignty on the Golan Heights has led to much comment assuming the territory has always been Syrian. But Jews did own land prior to 1948 in the Golan, and the JNF still own acres of land in the Houran, south-west Syria today. While ownership is a separate issue from sovereignty, the matter, like much else in the Middle East,  is not as clear-cut as some would have us believe.
The Jews  had a farming community at Ramtania at the turn of the century.  The  Beit Yehuda Society on the western slopes of the Golan had 2 ,000 dunams of  land (One dunam equals one English acre). Originally called Bir a Shagum,  the community was established by Jews from Safed. The original Bir a Shagum community suffered terribly from attacks by  Bedouin who used to arrive in the Golan every summer with their livestock. Families left because of the attacks and eventually just one family remained. They held out for a while but eventually left too.
Between  1891-4,  150,000 dunams were owned by Baron Edmond James de Rothschild and  100,000 dunams bought  by Agudat Haim Society in Fiq & Daraa. Land was also owned by the  Shavei Zion Association.   Land in the Horan area of what is today south west Syria technically belongs to the Jewish National Fund like the rest of Rothschild’s purchases now. 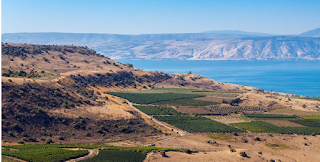 The Golan Heights, looking towards Lake Kinneret (Photo: Roman Sulla)
Here is an extract from Manfred Lehmann’s blog about the Baron Rothschild’s purchases:

“After making acquisitions in various places west of the Jordan, he turned his attention to buying land east of the Jordan, on the Golan. Toward the end of 1891 a certain Ahmed Pasha made it known that some 120,000 dunam of prime land in the triangle formed by the Yarmuk and the Allane rivers were up for sale at the bargain price of around 1.5 franc per dunam, provided that the sale was made “en bloc,” i.e., for the total area.

There followed intensive discussions among various Jewish groups interested in the offer, among them groups in Russia, New York and London. The Baron agreed to cover the whole cost of the purchase.

Since the Baron was always keen to preserve his anonymity, he arranged for the deeds to be registered in the name of Emile Frank, the Representative of Alliance Israelite in Beirut.

The plan called for the Russian group, under Ekaterinoslav, to take 25,000 dunam and the Americans also 25,000, with other holders taking the balance. But since these groups did not come up with the money, it fell to the Baron to become the owner of the major part of the Golan Purchase.

When the Baron died in 1934, 80,000 dunam on the Golan were owned by the Rothschild company, PICA (Palestine Jewish Colonization Association). The land had been registered in the name of PICA in 1929.

The Syrian government – Syria was then practically a French colony – tried in the 1940s to confiscate the land but failed.

In 1957, the son of Baron Edmond, Baron James de Rothschild (1878 – 1957), as one of his last acts in his life, transferred the deeds to the Jewish National Fund (Keren Kayemet) and from there to the Land Office of Israel. All deeds and other documents were transferred to Israel’s Foreign Ministry of Foreign Affairs.”

Books referring to Baron Rothschild’s purchases on the Golan

History and overview of the Golan Heights