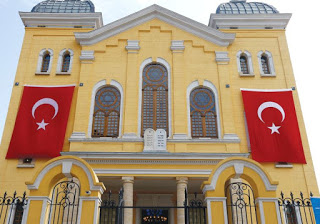 Following the Spanish Inquisition of 1492, the Ottoman sultan extended a warm welcome to Jews and permitted them to settle in his empire. But the honeymoon period was brief, and even Ataturk’s secular Turkish Republic adopted a policy of Turkification of all minorities. Ferkan Sen paints a bleak picture in the Jerusalem Post:

In many parts of the empire, moreover, the Jews found positions, some quite high ones, in the imperial bureaucracy as well as private doctors to the sultan..

Sabbatai Zevi, born on August 1, 1626 in Izmir, declared that he was the messiah, basing his idea on some kabbalistic theories. Zevi, who was complained about to the sultan, Mehmed IV, by the Jews of Istanbul, was given the choice of death or conversion to Islam and chose the latter, with many of his followers also converting.

However, this was not a true conversion. Zevi and the Jewish minority who followed him continued to adhere to Judaism.* Today, there is still a significant Sabbatean-descendant population in Turkey.

Over time however, the Jews came to be regarded in a much poorer light, until in the last days of the Ottoman Empire they had become the targets of Muslims and Turkish hatred. The dialogue between Theodor Herzl and Sultan Abdul Hamid II (the sultan refused Herzl’s offer to pay down 150 million pounds sterling of the Ottoman debt in exchange for a charter allowing the Zionists to settle in Palestine) put the Jewish nation in the crosshairs, being blamed as for liquidating the Ottoman monarchy.

The secular Turkish nation state that emerged after the fall of the empire adopted the Turkification of all ethnic minorities as the primary state policy. The Greeks, Armenians and Jews, who were seen as “minority status” under the Lausanne peace treaty with the allies, were perceived at first as members of the Turkic community.

At a press conference held in Izmir in 1923 founder of the modern Turkish Republic Mistafa Kemal Ataturk said: “We have some loyal citizens who have combined their fate with the fate of the Turks who ruled them. Especially since the Jews proved their loyalty to this nation and their homeland, they have lived in prosperity and prosperity to this day, and will continue to live in prosperity and happiness.”

Yet, Ataturk, however, did not prevent the discriminatory policies later implemented by the republic. For example, the 1934 Thrace pogroms, a series of violent attacks against Jewish citizens of Turkey in June and July 1934, was condemned but not stopped by the government.

Jews were assaulted in Tekirda, Çanakkale, Kırklareli and Edirne, with many rapes, looting and and murders reported.

15, 000 Jews abandoned were forced to flee Turkey as a result. National writers such as Nihal Atsiz wrote anti-Jewish articles.

The Varlik Vergisi (“wealth tax”), which was declared on November 11, 1942, was ostensibly devised to raise funds against the eventuality of Nazi or Soviet invasion, but in actuality was intended to nationalize the Turkish economy by reducing the influence of minority populations on the country’s economy. It was imposed on all citizens, but inordinately higher rates were imposed on the country’s non-Muslim inhabitants. Those who suffered most severely were non-Muslims like the Jews, Greeks, Armenians, and others, though it was the Armenians who were most heavily taxed. The winds of nationalism blowing from Europe affects these policies against minorities. Following these events and the creation of the State of Israel, Jewish immigration from Turkey to Israel increased markedly.

The most important ideologies that influence Turkish politics are Islamism, Turkism and Kemalism, a secular ideology.

*This is questionable. The followers of Zvi did not identify as Jews and their beliefs were in some cases quite the opposite of Judaism (-Ed)