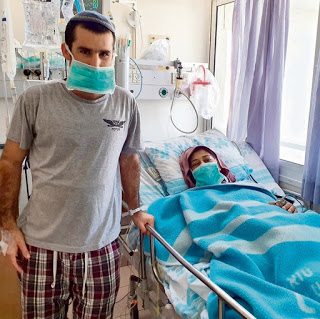 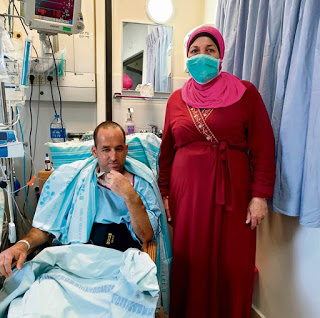 Twenty-four hours before the dramatic moment the polls opened, two Jewish men and two Arab women faced their own dramatic moment: a chain of operations that saved the lives of two of them. Ido from the religious community of Hoshaya intended to donate a kidney altruistically to Israel, which he did not know before, but unfortunately he was found unsuitable for matching. So did Aida Mashfaram, who intended to donate a kidney to her sister-in-law Hanan, but the results of the tests showed that this would not be possible. At Rambam Hospital, the four proposed a “chain of transplants”, which led to Aida donating her kidney to Israel, while Ido donated a kidney to Hanan.

Israel Belban (35), a resident of Kiryat Bialik, needed a kidney transplant due to hereditary disease. He says that four years ago he began receiving dialysis, and since then his life has changed: “I stopped working and almost every day came to Rambam Hospital for four hours. At one point I was hospitalized for six months, I was a transplant candidate and was waiting for a donation.The Matnat Chayim organization called me one day,”he recalls the day he was informed that a kidney had finally been found for him, just before he was disappointed: ” They said there was a potential donor, but unfortunately in the tests we conducted he wasnot fit to donate to me, “he said.

At the same time, and without knowing each other, Hanan, a Muslim from Shfaram, lay in the hospital waiting for a donation from Aida Husari, her 52-year-old sister-in-law. “I got a genetic test which told me that the kidney was not right for her,” Aida said.

The transplant operation performed by surgeon Dr. Ahmed Asalia and vascular surgeon Dr. Tony Karam took twelve hours. The crossover was indeed successful, and this week the donors and recipients met. “I met Aida in the hospital, thanked her and bought her a gift and chocolates,” Israel said excitedly. Aida added: “I am very happy to have saved the lives of two people. The racism of the politicians is killing us – we have learned to live together, Arabs and Jews.”

Rabbi Yeshayahu Haber, chairman of the Matnat Haim Association, which has been responsible for hundreds of transplants in recent years, welcomed the special transplant: “This transplant is a wonderful union between the different parts of the nation has been exciting and uplifting: Jews and Muslims, religious and secular, women and men. That is the beauty of a gift of life, and I hope we will continue to connect and unite the people through an altruistic life-saving. “