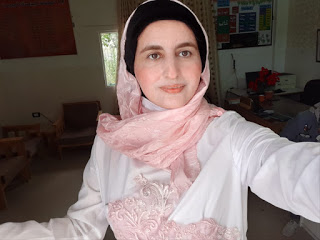 A Jordanian poet named Rania Dogan, who has published a number of books, writes a poem in As Sawsana that covers a number of current events.

Google translates poetry very poorly, but even with the unreadable parts one gets a pretty good idea of where Dogan, and probably many other Jordanians, are coming from.

The smell of Netanyahu is everywhere and Ivanka perfumes and skirts
Short Mossad walks in our phones ….. and our cars follow
Cooks in Alwats August ..and Alnmimh … and sometimes myopia
The media is controlled by the Jews
Our radio ….. penetrates our homes .. And our cars know about us more than we know
About ourselves
Our fate is all dependent on the Israeli elections
Century deal and included the Jordan Valley and the Dead Sea
Have mercy and have mercy
A crisis between teachers and the government in Jordan is worsening … stalled
Life in Jordan and education .. That home did not have only
Education … and salt … millions of students and teachers …. stopped them
Wheel of life … The teacher stood on the corner of the dream to fight .. And congestion
My people because of the difficulty of life …. and circumstances .. And life that
It became impossible .. and became impossible
In Egypt, it was a million to overthrow the police rule of the military Bastar… They killed Morsi and his legitimacy. They served his son’s heart to go to him.
Bashar al-Assad wanders stranded in Syria after all his crimes in Syria
It’s boredom again
Saudi Arabia is now sinking oil wells in it …. and lose half of its production and it is difficult for them now to collect their papers
The UAE stood half way … looking at the veins of her hands smelling the martyrs of Yemen
Trump with a square face …. the world moves right north waving the stick to Iran .. and war on it … and sanctions to leave Saudi Arabia in a dilemma ….. after being implicated
In the war in Yemen … and sold it arms … and looted its goods
Erdogan from far away wants to help. Qatar, Kuwait and Muscat are trying to save China … China started to take an economic role … and Putin is reading a wall of
The Quran
Israel …. Israel right-wing Jews …. and left-wing Jews
Beware … Injustice Beware that Trump is an ally because he may fall in the first election … Don’t make al-Sisi ally … Because his fall is close … Don’t reach out
Bashar on anything we reward
Beware .. and beware …….. deal of the century