TOP NEWS
http://elderofziyon.blogspot.com/2016/10/jewish-voice-for-peace-is-right-miko.html
Petra Marquardt-Bigman
There can be no doubt: the Orwellian-named “Jewish Voice for Peace” (JVP) did the right thing when they quickly backtrackedand issued an abject apology for condemning Miko Peled just because he had accused Israel of causing antisemitism. After all, Peled is a popularanti-Israel activist and an ardent BDS advocate, and I’m really glad that JVP rushed to re-embrace him as one of their own.  As I have long argued, “antisemitism is not a bug, but a feature of BDS,” and Miko Peled’s odious views and associations make him an excellent case study. 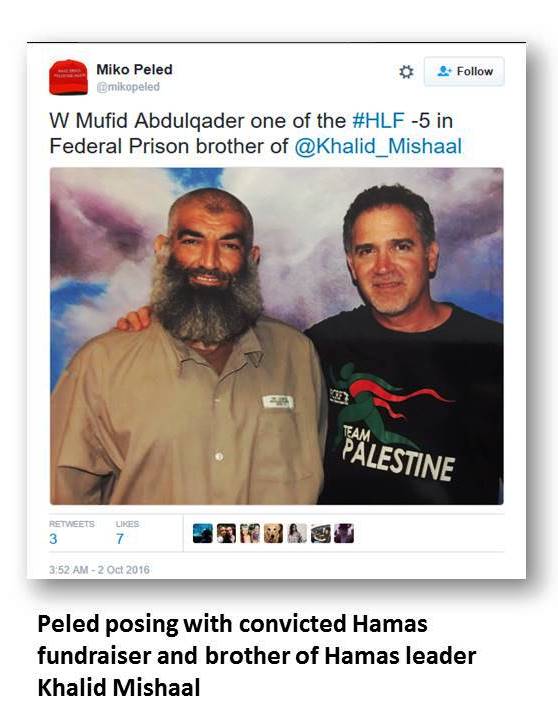 In a somewhat lengthy post on “Miko Peled’s big anti-Semitism problem,” I recently documented that any group or movement that was serious about opposing antisemitism would want nothing whatsoever to do with Peled. But of course, neither JVP nor most other groups and individuals devoted to anti-Israel activism can afford to do without the antisemitism that is all but inevitable if your goal is to demonize the world’s only Jewish state in order to justify its elimination for the sake of the establishment of yet another Arab-Muslim state.

Just like other prominent anti-Israel activists – e.g. Max Blumenthal or Ali Abunimah – Peled has a penchant for comparing Israel to Nazi Germany; he also likes to downplay the threats Israel faces from Iran’s mullah regime and Islamist terror groups like Hezbollah and Hamas. Peled has even teamed up with the aspiring suicide bomber and notoriousHamas apologist Azzam Tamimi to have his book promoted, and to promote one of Tamimi’s books on Hamas in turn. (If you’re lucky enough to never have heard of Azzam Tamimi, you can watch him deliver a hate-convulsed rant at a rally for the annual Iranian-sponsored Quds Day, where he called for the eradication of the “cancer” that is Israel.)

The collaboration with Tamimi has apparently paid off handsomely for Peled: it just so happened that a mutual friend of Tamimi and Peled in Gaza translated Peled’s book to Arabic, and Tamimi promptly invited Peled to his TV show to promote the new Arabic edition. One can only hope that Peled’s book will get the publicity it deserves and be prominently displayed at book fairs in Arab capitals alongside popular fare like the “Protocols of the Elders of Zion” and similar offerings.
Indeed, this is the kind of company Peled himself seeks out. For the past year, he has been a regular contributor to the American Herald Tribune (AHT) – a site that often features the utterly deranged conspiracy theories peddled by its “editor in chief” Anthony Hall as well as other AHT contributors such as the fairly well-known anti-Semitic conspiracy theorist Kevin Barrett. Barrett reportedlythinks that the “Holocaust controversy” is “a legitimate topic of historical debate;” similarly, Hall apparentlyonce declared that a book presenting the Holocaust as a myth requires a “very dramatic re-looking at what happened in Europe in World War 2.” Just a few months ago, Hall explained in a short You Tube clip “why he supports open debate on the Holocaust;” there is also another version showing Hall and two other people airing their obscene views on the same topic, and this clip elicited some enthusiastic comments from fellow holocaust deniers. These clips were posted by “CODOH – Committee for Open Debate on the Holocaust;” the offerings at this channel also promote the hard work of dedicated Holocaust deniers, such as “Curated Lies: The Auschwitz Museum’s Misrepresentations, Distortions and Deceptions.” 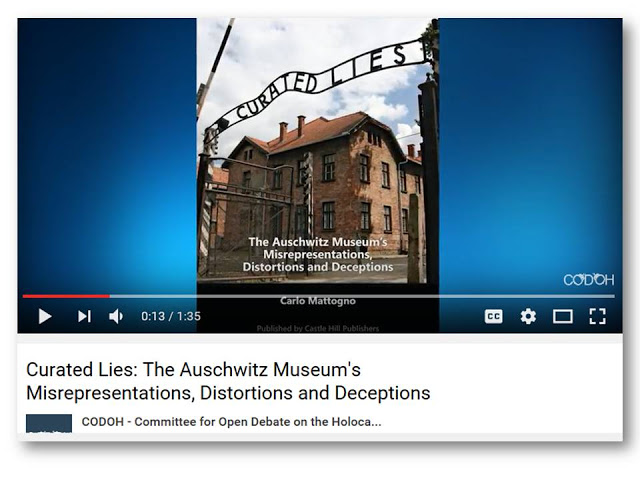 As it happens, Hall has occasionally found the work of JVP useful.
Hall may soon be able to devote himself full-time to Holocaust denial and the various conspiracy theories he likes to promote in his rambling AHT columns. Shockingly enough, he has so far been indulged by the University of Lethbridge, Canada, where he has been a professor for more than 25 years. But according to a recent reportby The Algemeiner, Hall has now been asked to resign; another recent reportindicates that he has been suspended.
The fact that Peled has been a regular contributor to a site where Hall serves as editor in chief is a vivid illustration of the swamp from which BDS draws support. And there are of course many other cases where just a little bit of research will reveal similarly unsavory associations – whether it’s Max Blumenthal being cheeredwherever there are Jew-haters, Ali Abunimah getting an award from an openly antisemitic Islamist “news” outfit, or Stanford professor Palumbo-Liu promotinga site with offerings that are arguably even more offensive than those on Hall’s AHT.
Even if JVP had not backtracked so quickly from its condemnation of Peled, it would have meant very little: the antisemitism that infests the BDS movement is so pervasive that rooting it out would inevitably lead to the collapse of BDS.
Last but not least, here’s a quick update on Peled’s current activities: it seems he is currently visiting Israel and the West Bank – for him it’s of course all “Palestine” – and he has been meetingwith old friends like the notorious Tamimis of Nabi Saleh. According to Bassem Tamimi, they are apparently planningsome kind of “conference” in November. Just a day before Peled visited his “brother” Bassem Tamimi, Bassem’s wife Nariman posteda heartfelt “happy birthday” for Nizar Tamimi, a nephew of Bassem who is a convicted murderer and the husband of Sbarro massacre mastermind Ahlam Tamimi. No wonder Peled feels so close to them. 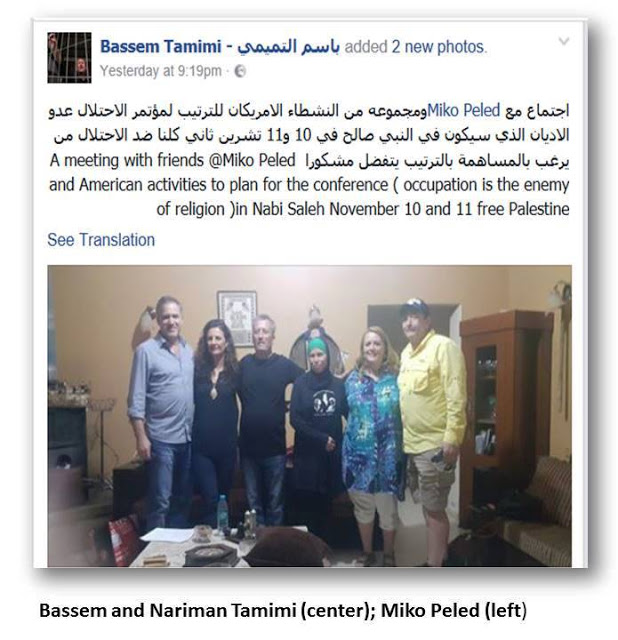 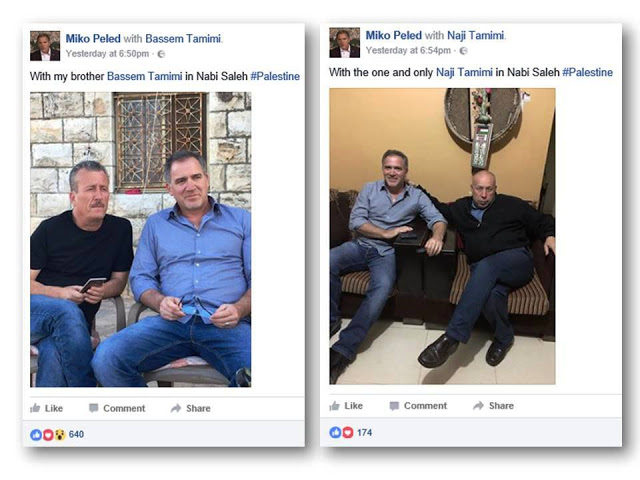