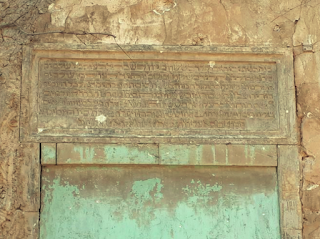 After the devastation wrought by ISIS, Mosul is slowly coming back to life, and traces of Jewish existence are re-emerging from under the rubble. Seth Frantzman and Omar Mohammed report in The Forward:

Mosul once had a thriving Jewish community whose roots stretch back to the 8th century B.C.E. There are tombs in and near Mosul that commemorate the biblical prophets Jonah and Nahum — ISIS blew up the tomb of Jonah, known as Nabi Yunis in Arabic, in July 2014.

Many other local Jewish sites were known to local people but were kept secret after the last Jews left Mosul. The community secreted away inscriptions and items with family friends; these were passed down or left aside to collect dust. The fact that they were hidden kept them safe from ISIS invaders. Some of the sites, such as the synagogue, were used for other purposes — ISIS turned the synagogue into a storage area for bombs and used it as a hideout to avoid coalition airstrikes, according to the Voice of America. The former Jewish quarter in Mosul was called ‘Mahalet al-Yahud’ (Jewish neighborhood), and now it’s called ‘Ahmadiya’.

After the destruction from the 2017 fighting subsided, we found a local resident who asked to remain anonymous and was posting photos that were circulating privately online of inscriptions and old buildings. He didn’t know what the pictures were of, but someone noticed the Hebrew letters. Residents thought one of the buildings was “just rubbish.” We checked it out and the writing on a stone lintel was indeed in Hebrew. It is not surprising that people thought the site was “rubbish” — an American soldier wrote about finding the building in 2003 and described it as a “garbage dump.”