Egypt Today reports (with thanks: Boruch):

Haroun posted on her Facebook page photos of the vandalized tomb, saying “I spoke. People, help us build a fence. If I were financially capable, I would actually build it myself, brick by brick, to protect the memory of the people buried here.” 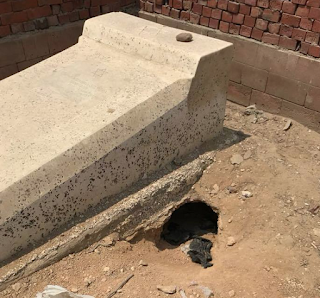 The desecrated tomb of Shehata Haroun in Cairo’s Bassatine cemetery

Europe-Israel reports (with thanks: Michelle):

The Jewish cemetery of Sousse (Tunisia a country of tolerance) was desecrated this Tuesday, July 17, 2018, by anti-Semitic Muslims who openly organized a mechoui (barbecue) on Jewish graves. 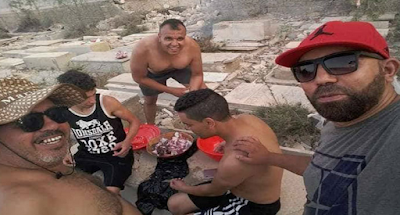 Having a barbecue on a Jewish gravestone

Tunisia has become one of the most active centres in the Muslim world for spreading anti-Semitism. This hatred of the Jews does not spare the dead and the cemeteries.

These acts of hatred in the third city of Tunisia deepen the disappointment of the small Tunisian Jewish community, which can not rely on local authorities to prosecute the culprits.

This kind of behavior is tolerated by the local authorities who want to reclaim the land using these same people. The city of Sousse, led by the new mayor Tawfik Aribi, seeks to take over the property of some Jewish families who have not yet left.