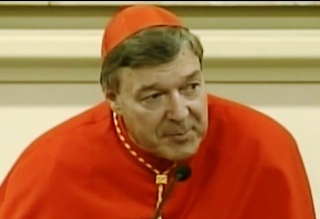 In March this year, as Cardinal George Pell (pictured) began the six-year term of solitary confinement against which he has appealed (the Supreme Court of Victoria’s verdict still awaits him), his 2002 biographer, journalist Tess Livingstone, reported:


‘A decade ago, Pell’s close friend, the late cardinal Francis George of Chicago, who died of cancer in 2015, predicted hard times for faithful church leaders in an increasingly aggressive secular Western culture.

Like many of his church heroes, Pell has been a formidable leader, a builder and a teacher. But unlike hero cardinals imprisoned for their faith over the centuries, Pell stands convicted of five grotesque crimes.

Time, and higher courts, will determine whether church history, the subject in which he excelled at Oxford, will deride him in the long term as an arch hypocrite or rank him among church heroes persecuted by sinister forces that have run amok.’  [Emphasis added here and below]

Also in March, longtime Pellophobe David Marr (one of the principal proponents of an extraordinary left-orchestrated campaign of vilification of the cardinal long before he was charged with, let alone convicted of, historic sex crimes: see, for instance’s, Marr’s interview with the ABC’s obligingly receptive Heather Ewart here) gloated:


“[B]y jailing a cardinal for these sordid crimes Australia has demonstrated once again that the rule of law runs in this country. Getting here hasn’t been easy but no other country stares down the Catholic church as we do now. This is a day to be proud of that record. In their rage and confusion, Pell’s supporters have declared their man a martyr to the mob, a victim of press vendettas, a great priest whose reputation has been sullied beyond repair by the left. But that’s not what his fall is about. Somewhere in the past few years, Rome lost the power to protect men like him.This secular country at the far end of the Earth stood up to Rome to hold the first national inquiry in the world into the role of faiths – particularly the Catholic faith – in a systematic, old and hidden regime of child abuse.”

(Incidentally, Marr neglected to tell us that in this “secular country at the far end of the Earth”  one faith, Islam, had specifically been excluded by the federal Labor government of the day from the inquiry’s scrutiny.)


‘When he prays his daily Office — the psalms, scripture and prayers Catholic priests read every day from the breviary — George Pell offers part of it for his accusers, including the man whose testimony was accepted by a jury in December, landing the cardinal into an isolation cell in a Melbourne jail.

“I pray for them. That’s what we’re supposed to do,’’ he told a friend a few weeks ago.

For all the vitriol hurled at Pell, supporters are outraged, anxious for his safety and distraught over what they are convinced is a gross miscarriage of justice.

This week’s release of his video interview with Victoria police in Rome in October 2016 was a telling development for those close to Pell, as well as for others who do not like him or his views but who recognise why the claims against him are so implausible. The interview was played to the juries in both trials.

Questioned by police about accusations that he abused two choir boys after Mass in St Patrick’s ­Cathedral in 1996, Pell looked and sounded gobsmacked. He rejected the grotesque, sacrilegious claims as “deranged falsehood’’ and “a load of garbage … in the sacristy after Mass? Need I say more?’’

The allegations, as he told police, involved “vile and disgusting conduct contrary to the explicit teachings of the church, which I have spent my life representing’’. They were made, he said, knowing he was the first bishop in the Western world to create a church structure to “recognise, compensate and help heal the wounds inflicted by sexual abuse of children at the hands of some in the Catholic Church”.

Pell’s answers were succinct and clear, prompting his friends and outside observers to believe his defence would have been stronger had he taken the stand in court. In person, Pell is warmer, kinder and more humorous than he has appeared in media interviews in which, conscious of the responsibility of his position, he has measured his words carefully. The gentler, softer side of his nature shone through in the character references presented in court.

Pell, who was brought up to keep a stiff upper lip in facing ­adversity, has been stoic since he arrived back in Australia, voluntarily, in July 2017 to face the music. “It wouldn’t do for me to fall apart. What would that achieve?’’ he told one friend. “My faith and my innocence’’ were sustaining him, he said.

A few months ago, he said he was ‘‘beyond anger’’.

On occasions, the cardinal has referred to his protracted tribulations as “a small penance’’. A priest who has been close to Pell for 35 years says the cardinal is acutely conscious of the church’s failings in dealing with child abuse and that his attitude to his personal ordeal is shaped by St Paul’s letter to the Colossians, which spoke of offering personal sufferings for the good of the church….’

A leaked circular letter, apparently written by a person close to Cardinal Pell, found its way onto Facebook some time ago: 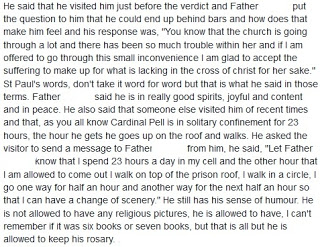 This past week, as reported by the Catholic News Agency, a letter in what has apparently been verified as in the cardinal’s handwriting, has appeared on a (since deleted) pro-Pell Twitter page.  The letter thanked supporters for their letters (he’s received between 1500 and 2000 since being jailed) and prayers, before expressing his opposition to a working document,the Instrumentum Laboris of the Amazonian Synod.

These lines from the letter, misunderstood and twisted (televised examples here), have enraged Pellophobes, and the Victorian Department of Justice is investigating the possibility that the cardinal, as a convicted prisoner, broke the law by perhaps arranging for his letter to be posted to the internet:


“The knowledge that my little suffering can be used for good purposes by joining Jesus’ suffering gives me purpose and direction. The challenges and problems in the life of the Church must be faced with a similar spirit of faith.”

But a former Victorian state premier stands his ground in declaring his belief in Pell’s innocence: 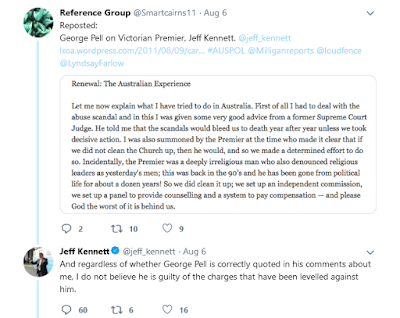 
‘ …. The only Australian public figure I can think of to compare with Sir John Kerr in the pantheon of leftist demonology is the still-jailed Cardinal George Pell. He is loathed for being a conservative, a climate-change ‘denier’ and, above all, as the personification of child sexual abuse, both as a senior representative of the Catholic hierarchy and latterly as a convicted abuser himself. We do not yet know what will be the decision in his appeal, but we can be pretty sure that if the appeal is successful his enemies will not be pleased, to say the least.

A rational individual, whatever his politics, who believes Pell to be justly convicted, would shrug his shoulders if the appeal were upheld and accept that the law had taken its course. But the anti-Catholic obsessives of the Left have repeatedly shown that they have no time for that kind of rational response. At its more sophisticated, academic level, the Left has doubtless dismissed rationality itself as some sort of discredited manifestation of white ‘privilege’; at its lower shrieking street-mob base, rational argument is simply – congenitally – beyond their comprehension. And while we can expect the ABC and the ‘quality’ media, if true to past form, to do their utmost if the appeal is successful to continue their commitment to poisoning the public mind against Pell (‘Court betrays survivors’, ‘An appeal which ought never to have been permitted’ etc), the danger is that the less cerebral Left will turn physically nasty, assaulting clergy and setting fire to churches….

And how would Pell himself be kept safe if freed? By going into exile like Sir John, perhaps? ….’

Be sure to read the entire article, here