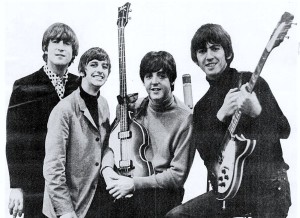 Jerusalem, August 16 – Jesus Christ, son of God, the Prince of Peace, King of the Jews, Messiah and Savior, shrugged His shoulders today and stated He had no problem with John Lennon of the Beatles asserting they were more popular than He.
At a press conference at the Church of the Holy Sepulchre in Jerusalem’s Old City, the Lord incarnate as Jesus dismissed protests over Lennon’s 1966 remarks and what he called the “insecure obsession” with the words and their implications in the ensuing decades.
“He was right, you know,” pronounced the King of Kings in human form. “I had a good run, a lasting impact, but as a driver of contemporary culture, the Beatles have outdone Me. I don’t have a problem acknowledging that, and no one else should, either.”
“To those who burned or crucified Beatles records, made threatening phone calls, canceled concerts, or otherwise did their darnedest to display righteous outrage, I have one word,” continued the founder of the Christian religion. “Chill. You do Me no favors by showcasing your insecurity over the observations of a celebrity. It says more about you than about him, or about Me, and trust Me – you do trust Me, right? – what it says is less than flattering.”
“Divine humility was kind of a major point in the whole exercise of My incarnation, torment, and crucifixion,” added the Messiah. “If you think I’m going to get exercised, or that you should get exercised, when some egocentric blowhard who got catapulted to fame overnight says something in a way you don’t like, well, there’s a different kind of news you should be focusing on than that of My dying for anyone’s sins.”
The Christ also observed the unsavory similarities between those who raised such vociferous objections to Lennon’s comments and those to whom the objectors would never want to be compared. “These people remind Me of those who rioted when My good buddy Mohammed appeared in a bunch of cartoons a number of years ago. Went totally ape$#!t. Even he couldn’t believe how his followers, once the custodians and promoters of the most advanced civilizations had devolved into shrieking loonies over a bunch of drawings. Well, that’s what we have here. As I said, chill.”
“I don’t need you to defend My honor – I think I demonstrated that on the cross,” concluded Jesus. “If you’re wondering what Jesus would do under the circumstances, rest assured it does not involve rioting. The whole humility thing appears to be lost on many of you.”