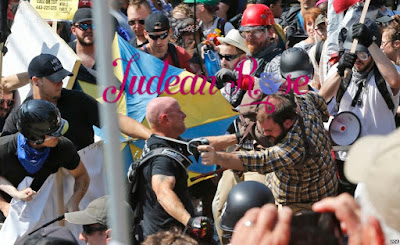 No, Mr. President. This is a provocative effort by Neo-Nazis to foment racism and hatred and create violence. Call it out for what it is. https://t.co/WibPqkLsLa

People like the president and Bernie Sanders, you see, live under the illusion that Jew-hatred is nothing special. That’s despite the fact that we have, still walking among us, people who survived the systematic rounding up, gassing, and burning of more than 6 million Jews.
What is comparable to that event in history? How is what happened there anything like garden variety racism?
The answer?
It isn’t.
And lumping Jew-hatred with any other hatred, bigotry, or xenophobia waters it down. Takes its meaning away. Makes us feel less alone, less targeted, and puts the world in danger, puts us back in time to the chaos of the Holocaust.
There. I said it. The word that is in a category of its own.
Now you might be excused for looking the other way and hushing up the Jew thing if you’d been duped into thinking the protest was really about the removal of the Robert E. Lee statue, or a thousand or so alt right Trump supporters. Except that we know exactly what went down at Charlottesville.
We know that men holding torches shouted “Jews will not replace us.”
As if Jews had anything to do with Robert E. Lee or Trump’s election.
We know that in Charlottesville, men wore swastikas and gave the Nazi salute in the bright, hot summer sunlight while chanting, “Jews, Jews, Jews, Jews.”
But President Trump saidnothing about the Jews or antisemitism, “Racism is evil,” he said, though the Jews are not members of a single race. “And those who cause violence in its name are criminals and thugs, including the K.K.K., neo-Nazis, white supremacists and other hate groups that are repugnant to everything we hold dear as Americans,” he said, blurring the significance of the chants, the symbols, and the salutes.

“As I have said many times before, no matter the color of our skin, we all live under the same laws,” said Trump, though Jews are not one color or another. “We all salute the same great flag, and we are all made by the same almighty God. We must love each other, show affection for each other and unite together in condemnation of hatred, bigotry and violence,” said President Trump, neatly removing any specific reference to the people specifically targeted by the Charlottesville protestors.

Celebrities, whose words should not matter to anyone but do, followed suit.
Olivia Wilde, for instance. Olivia Wilde is an actress. Why should any one of us care what she thinks about abortionor racism? It’s a mystery, but we do.

That means that she, Olivia Wilde, is in a unique position to speak out about the ugly, blatant display of Jew-hatred at the Charlottesville protest. But Wilde followed the path of Trump and Sanders and watered it down, speaking of Nazism, blacks, and the alt right, but refraining from all mention of the “J” word.

I know we are not created to hate each other, but to help & love. Use hashtag #BeKind #ThisIsNotUS to tweet positive messages. #Charlotte

Kim Kardashian, a woman of color married to a black man, also chose not to see the singularity of what those men were chanting. She spoke of “Americans” and “targets of hate & violence,” but like Trump, et al, nothing about the Jews.

How tragic that this is what we’ve come to. My prayers are w those in Charlottesville & every American who is the target of hate & violence.

Demi Lovato spoke of general prejudice and racism. Again, seeing nothing special about what exactly those men were chanting. Not paying heed, giving it no credit.

Love. Please, I beg of the evil to let go of the prejudice and racism and to #stopthehate. #prayforCharlottesville ✌🏼 pic.twitter.com/FkPoohkfAO

Jessica Alba went on for quite some time on Instagram chiding those of us who claim others “aren’t THAT racist,” but saying nothing at all about the target of the protestors or their identity. Which makes you wonder whether she might just be THAT racist.

#standupforwhatsright #Repost @cleowade #MLK said it best when he said: “We will have to repent in this generation not merely for the hateful words and actions of the bad people but for the appalling silence of the good people.” Racism & bigotry does not merely exist on the faces of the terrorists marching in #charlottesville We all know people who have said or done something that is wrong while we remained silent or tried to justify it because of the other person’s background, age or by saying “well they aren’t THAT racist” Enough is Enough. Start with you. Let your voice be the one that changes the people around you. Start today. Be a truth teller. Speak truth to power. Be a freedom fighter. Fight the good fight. I love you.
A post shared by Jessica Alba (@jessicaalba) on Aug 13, 2017 at 9:42am PDT

The interesting part of this is that there is no difference between President Trump and Bernie Sanders or their mutual supporters. None of them understand that the Jews are the canary in the coal mine and that they have been silenced: muffled on campus and hushed up in the news. They’ve been plastered over with an Arab narrative that paints them as the villain of the story, whose every word is a lie.

And all are complicit, including the Jews who join the masses, speaking of “occupation” and “choosing love” (instead of truth).
The Jews are not just hated generally, as a needed focus for blame, for venting anger and spleen. There’s a back story. The Jew has long been typecast as the one who comes to undermine and destroy society, in particular, white Christian society.

Why else was the Jewish American Leo Frank lynched for an act he did not commit? But no. This is an ugly story that must be muted.

Along with Henry Ford’s Jew-hatred and the Johnson-Reed Act of 1924 barring Jews fleeing persecution from the United States, the latter of which prompted President Calvin Coolidge to say at its signing, “America must remain America.”

All of these things made it even more important for the president and others to decry what so nakedly happened in Charlottesville by giving it its proper name.
Because Jew-hatred isn’t just a fringe thing, something in which wild-eyed crazy men indulge themselves, but something mainstream, too.

Here one must recall the 1862 General Order No. 11, penned by General Ulysses S. Grant, a man who would someday, like Trump, be president. The order expelled Jews from territory under Grant’s command over drummed up claims the Jews were war profiteers, running goods between the Union and the Confederacy. Grant’s papers from this time referred to the black market as being run “mostly by Jews and other unprincipled traders.”

As one can see, Jew-hatred, contrary to myopic belief, isn’t confined to Eastern Europe. In some of its iterations, Jew-hatred is as American as the DAR or apple pie.

All of this is why, when you’ve got men in Charlottesville shouting the English version of the Nazi cry, “Blut und boden,” (blood and soil), it’s not sufficient for the president of the United States to give a canned, watery speech—to speak of “racism,” something that brings to mind the divide between black and white people and the controversy over Trump’s immigration policy. In using broad terms, you see, the president failed to address the crux of the problem, and the very specific danger at hand.

We have seen the rise of the far left ethos in America. This societal state of mind, historically, has always led to blaming a specific other for economic and social woes. And we know the identity of that other, the one who is always blamed, always at the core of the deepest hate possible, the one who will always be hunted down and murdered, the one who must be eradicated at all costs, as the presumed source of the deepest frustrations of man.
The Jew.

The one who must never be named.