The Australian “Dual Citizenship” debacle, which has seen several federal policians departing their parliamentary seats because they are dual citizens of Australia and another country grew ugly during the past week or so with suggestions, lauded by antisemites, that energy minister Josh Frydenberg, may be ineligible to sit in parliament because his mother was born (1943) in Hungary, a claim roundly denounced by prime minister Malcolm Turnbull. 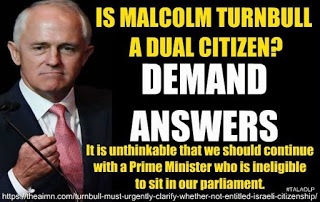 Now, antisemites and anti-“Zionists” are jubilant over the issue of whether Mr Turnbull himself is ineligible to sit in Parliament owing to the Israeli Law of Return!

The first is this interview with the Times of Israel in September 2015, recorded when Turnbull ousted former Prime Minister Tony Abbott and took over the top job:

My mother always used to say that her mother’s family was Jewish, he (Turnbull) told the Australian Jewish News two years ago. Judaism is passed from generation to generation on the mother’s side, so if his mother was in fact Jewish, so is Turnbull.

The second is a piece from the Australian Jewish News, August 2013, headlined “Menachem Mandel Turnbull?” in which the same statement is made by Turnbull about his mother, Coral Lansbury.

If Turnbull is Jewish, he is, as is every Jew in the world with the exception of criminals and terrorists, entitled to Israeli citizenship under the 1950 Law of Return.

How does this bring into question Turnbull’s legitimacy as an MP?

Section 44(i) of Australia’s Constitution disqualifies someone from office if that person:

We know from recent events that:

The High Court’s reading of section 44 is strict and unsurprising. It means that a dual national is barred from Parliament even where they were born in Australia, are ignorant of their other citizenship and have never attempted to use the rights or privileges of another country. A person can even be disqualified where they become a dual national later in life due to legal changes in another country.

Obviously his citizenship status and S44 were far from Turnbull’s mind in 2013 and 2015, when the interviews were recorded. Yet he was, at the beginning of his political career, like any other aspiring MP whose background carries the possibility of dual citizenship or entitlement to that citizenship, required to establish his status before standing for parliament. His failure to do this places his legitimacy as an MP and Prime Minister in doubt.

For the sake of the country’s stability, Turnbull must immediately address these issues, and rapidly and transparently convey his citizenship status to the Australian people. It is unthinkable that we should continue with a Prime Minister who is ineligible to sit in our parliament.

Energy Minister Josh Frydenberg is in the same situation as Turnbull. Frydenberg’s mother is Jewish, and he is also entitled to Israeli citizenship under the Law of Return.”

The originally appeared here: the comments below the line there tell their own story.
Its author, Jennifer Wilson, is thus described:

“Jennifer, who has a PhD, has worked as an academic and a scholar, but now works at little of both her careers. She has published short stories in several anthologies, academic papers and book chapters, frequently on the topic of human rights. Her interests and writing are wide ranging, including cultural analysis. Jennifer has written for On Line Opinion, Suite 101 and ABC’s Drum Unleashed. Jennifer is well-known for her long-running blog No Place for Sheep: an eclectic blog that covers politics, society, satire, fiction and fun stuff.”

So I’m assuming that it’s a clumsy satire on her part, misrepresented by the Jew- and Israel-haters who have shared it on Facebook.

Mr Turnbull is certainly a firm friend of Israel, and as I’ve written before, he’s hinted more that once that he is of Jewish descent on his mother’s side.
To quote the Australian Jewish News in 2013:

‘….“My mother always used to say that her mother’s family was Jewish,” the member for Wentworth said….
Asked if his mother’s revelation has shaped his views he said: “Yes, maybe.”
“I grew up in the Eastern Suburbs and as we all observe there were a lot of Jews in the Eastern Suburbs and I have always been very comfortable.
“There is no doubt that the strong traditions of family and the whole heimishe atmosphere of the Jewish community, which I’m sure some people don’t like, for me – as someone who is a good friend, but not part of it – I find very admirable.”
Reflecting on his mother, he noted, “She had a lot of Jewish friends in Sydney and a lot of Jewish friends in Philadelphia, where she was living when she died.”….’

But as commenter Max stated on this post of mine, he (Max) failed to find a definitive answer:

‘Turnbull’s being pretty well claimed as of Jewish halachic descent by half the Jewish press in the world! If he wants to be Jewish – great – who are we to keep him out? As far as I can make out his mother Coral’s mother was May Morle whose own mother was Alice Harriet Hawes, born GB 1848, her mother being Sarah somebody – there the trail runs cold.’

And as far as “dual citizenship” is concerned it wouldn’t matter if he had! Being eligible to emigrate to Israel under the Law of Return does not an Israeli citizen make.