I found these two stories interesting. From Haaretz:

Left-wing Jewish group J Street attacked the Trump administration on Thursday for refusing to endorse a two-state solution to the Israeli-Palestinian conflict.
In a statement sent by email, with the headline “Trump Admin becoming Obstacle to Middle East Peace,” the group’s president, Jeremy Ben-Ami, said that by taking up such a stance, the administration was hurting its own efforts to reach peace.
Ben-Ami’s statement came after a spokeswoman for the State Department, Heather Nauert, said on Wednesday that the administration is not endorsing any specific formulas for ending the conflict, because that could create “bias towards one side or the other.” Nauert was responding to a question about the two-state solution during her daily press briefing.
The State Department’s spokeswoman “displayed dangerous ignorance about the nature of the Israeli-Palestinian conflict and what it will take to end it,” Ben-Ami said.
He added that, “The Trump administration has spoken often of its desire to broker a comprehensive and transformative peace agreement in the Middle East. Early steps taken by the special envoy and others suggested a real interest in constructing a viable approach to achieving that objective. But there is no way to accomplish that goal without a two-state solution.” 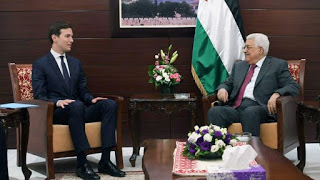 “We very much appreciate the efforts of President Trump, who announced from the beginning that he will work to reach a historic peace deal and has repeated this more than once during the meetings we held in Washington, Riyadh and Bethlehem,” Abbas said before his meeting with Kushner.
“I want to stress that the American delegations is working for peace and we will work with them to reach what Trump calls a peace deal. We know things are hard and complicated, but nothing is impossible if you put in an honest effort,” he said.

“Pro-peace” J-Street is saying that peace is impossible with the Trump administration refusing to say the magic words “two state solution” – but Abbas says it is possible.

Obviously both parties are being driven by political considerations, not reality. J-Street looks for any opportunity to insult Trump and Abbas is not willing to publicly go against him. (In this case Abbas is like Netanyahu who received criticism for not directly condemning Charlottesville neo-Nazis; apparently Abbas is far more immune to criticism for wanting to stay in Trump’s good graces than Bibi is.)

J-Street apparently wants Abbas to angrily slam the door in Kushner’s face until he says the magic words. Because Jeremy Ben-Ami’s hubris overrides any desire for real peace.

The more important question to J-Street is: What progress, exactly, towards peace did the Obama administration accomplish in eight years of pressuring Israel and adopting the Palestinian talking points? Ben-Ami is so sure that an American push towards a pre-defined solution is a prerequisite for peace, but how much closer was that goal in 2016 compared to 2008 with a president whom J-Street supported to the hilt?

The fact is that despite the Trump administration’s many problems, it has done more for Middle East peace than Obama ever could. Obama’s vision was bilateral peace with Abbas having veto power over any Israeli position; Trump is pushing for a regional solution that involves Jordan, Egypt, Saudi Arabia and other Gulf countries in a more comprehensive solution. This makes perfect sense because Israel can help Arab states in many ways, from technology to coordinating a strategy against Iran, and Arab states host hundreds of thousands of people who have Palestinian ancestry that they refuse to give citizenship to. They must be involved. Indeed, Trump’s strategy for peace is one of the smarter things we’ve seen out of the White House, and Arab leaders are making decisions that are good for the entire region, not just narrow Palestinian interests where Abbas can continue to just say no to everything as he has done consistently.

J-Street wants to continue to give Abbas the right to be a rejectionist, something that he did even more during the “two-state” Obama administration. That is not pro-peace – that is anti-Israel and, indeed, anti-peace.