Anti-Israel commentators and self-styled “progressives” have seized white supremacist Richard Spencer’s ridiculous assertion that he regards his movement as a type of “white Zionism” as proof that Zionism is akin to white supremacy.

This absurdity has been published not only in Electronic Intifada and by idiots like Ben Norton but also in The Forward (by a “Jewish Voice for Peace” leader).

So if a neo-Nazi says they support a movement, that means that the movement is neo-Nazi? 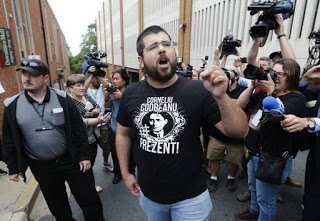 Matthew] Heimbach, a 26-year-old Indiana resident, is an emerging leader of the white nationalist movement in the United States. He has appeared with and supported the Knights of the Ku Klux Klan, the Aryan Terror Network and a variety of Nazi organizations, according to news articles and reports from the Anti-Defamation League and the Southern Poverty Law Center.

Heimbach was involved in the planning for a 2013 Nazi rally in Kansas City to commemorate the 75th anniversary of Kristallnacht. Kristallnacht occurred on the night of Nov. 9, 1938, when paramilitary civilians associated with the Nazi Party rampaged through German streets, destroying and ransacking Jewish homes, synagogues, schools and businesses.

In 2014, Heimbach was a keynote speaker at Stormfront’s “Death to America” meeting in the Smoky Mountains. In that speech, Heimbach repeated tired old theories about a Jewish control of the federal government and international banking. But he went even further, arguing that the United States was created as part of Jewish/Freemason conspiracy.

Heimbach also allied his group with the Aryan National Alliance. At a joint meeting in Salem, Ohio, Heimbach said, “We must support the creation of an ethno-state.”

In 2014 he said: “When the Jews are strong, the Jewish people engage their supposed foes with cold-blooded cruelty. This is why we must understand a unity between those who struggle against the Zionist State and International Jewry here in the West and those on the streets of Gaza, Syria, and Lebanon. We face the exact same enemy, one who doesn’t care if they kill our women, children, and elderly. We are facing a truly Satanic enemy, one that cannot be understood except through the lens of Christianity and Christian prophecy.”

It seems very clear – according to the “logic” of these so-called “progressives” – that they are linked to neo-Nazis and white supremacists.

And I haven’t heard any of them denounce the words of Matthew Heimbach. QED.

So since the anti-Israel “progressive” left is neo-Nazi, by their own thinking, then it is legitimate to engage in physical violence against them.

In other words, they should commit suicide.

If they are to be intellectually consistent, that is.