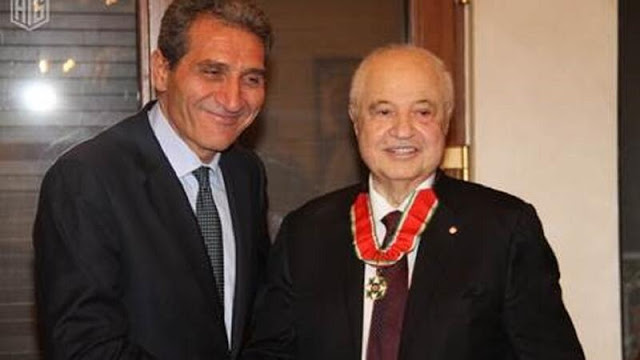 
The President of the Republic of Italy, HE Mr. Sergio Mattarella, bestowed the honor of the “Commendatore dell’Ordine della Stella d’Italia ” (Commander in the Order of the Star of Italy) upon HE Dr. Talal Abu-Ghazaleh, for his valuable contributions and the effort of Talal Abu-Ghazaleh Global in strengthening the Italian, Jordanian and Arab relations.

Established in 1914, the Ordine Della Stella D’italia is one of Italy’s highest honors presented to global dignitaries who contribute in strengthening and promoting relations between Italy and other countries.

The Order was presented in a special ceremony attended by HE Mr. Fabio Cassese, the Italian Ambassador to Jordan, representing the Italian President and a host of Ambassadors to Jordan.

The Italian Ambassador read the official citation stating that Dr. Abu-Ghazaleh is “a close friend to Italy,” and “a friend of all the international community.”

It turns out that the honoree is an antisemite.

From MEMRI, translating a 2012 Al Ghad interview with Abu-Ghazaleh:

Abu Ghazaleh cites numerous examples of persecution of Jews, including their expulsion from various countries between the 14th and 18th centuries, and examples of leaders and public figures who spoke out against them: “Henry Ford saw the Jews as an international problem, and wasted much money on media and other means to wage a campaign against them. He also presented his ideas in a book called The International Jew: The Protocols of the Elders of Zion, The World’s Foremost Problem [sic]. American president Franklin Roosevelt saw the Jews as an American problem, and claimed that the day would come when the Americans would regret that there were Jews in their midst…

He concludes: “The Jews became known for manufacturing lies and carrying out crimes and terror. [They] created a negative model for establishing a state when the occupation authorities began bringing the ‘Haganah’ gang into Palestine, and later enlisted all the armed Jewish movements, after calling on all the Jewish residents of all the countries in the world to immigrate to Palestine and establish a state [there]…”[3]