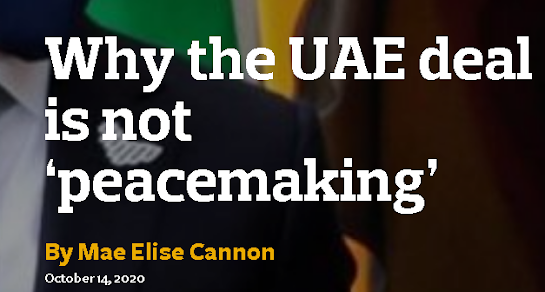 Yet again, a tendentious article by a person who supposedly cares deeply about peace against Israel making peace with anyone until a highly specific set of arbitrary criteria are fulfilled.

This one is by Rev. Dr. Mae Elise Cannon, executive director of Churches for Middle East Peace, writing in The Forward.  Her arguments against the Abraham Accords are the same as the others we have seen:
1. They aren’t peace accords because Israel was never at war with the UAE or Bahrain.
Whatever nomenclature you use, up until now they didn’t speak to Israel officially and now they are. Tourism is being set up, partnerships announced, Jews sending messages of peace in Arabic and Arabs sending messages of peace in Hebrew. Who could be against this?
“Peacemakers.”
2. Bahrain is run by a Sunni minority over a Shiite majority; the UAE is involved in the Yemen war, so they violate human rights and Israel shouldn’t make agreements with them.
By that logic, Israel shouldn’t make peace with the Palestinians either, since they have no respect for human right – for women, for gays, for their own prisoners, for political opponents.
For that matter, the US should never have made any agreement with Iran on the nuclear issue either.
These all make exactly the same amount of sense.
3. The agreements don’t address “occupation” or Palestinian demands.
Does that make them bad? Seemingly so.
All of thee arguments are grasping at straws, meant to obfuscate the real problem that these “peacemakers” have with the accords: they hate Israel and anything good for Israel must be opposed.
CMEP supports the thoroughly antisemitic Kairos Palestine document. They have supported the PFLP-infested “Defense for Children Palestine” that routinely makes up facts to demonize Israel. They have called Israel an “apartheid” state. It has routinely partnered with BDS advocates.
It is not a “peace” organization. It is an anti-Israel organization hiding behind a façade of “peace.”
Every single person and organization that has come out against these agreements has been found to be against the existence of Israel as a Jewish state. All the arguments they are using are excuses to cover their real objection to the accords: they don’t want Israel to have any legitimacy.
This article proves this perfectly.