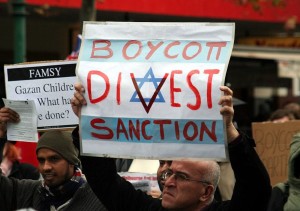 Berkeley, October 15 – Activists campaigning for the economic, diplomatic, and cultural isolation of the world’s only Jewish state disclosed today they prefer the three-letter shorthand term for their movement to any more honest name, which would require them to use a cumbersome moniker indicative of the real-world negative effect the movement has not on Israel, but on Jews everywhere else.

Local chapter leaders of several groups billing themselves as pro-Palestinian or focused on human rights, but who somehow muster their numbers and voices only against Israel, explained in interviews that the initials of “Boycott, Divest, Sanctions” lend themselves to punchier, more nimble rhetorical use than any name that would convey the actual outcome of the groups’ activities, such as “The Movement to Make Jews Feel Unsafe Anywhere” or “The Committee for Thinly-Veiled Threats of Antisemitic Violence on Campus.”

“Speaking out our actual aims, not to mention accomplishments, would be a real mouthful,” lamented Bay Area Jewish Voice for Peace coordinator Timothy al-Masri. “Many of us would like to think that our campaigns have resulted in even a single instance of boycotting, divesting, or sanctioning Israel, and we can sometimes even glom onto an instance of someone canceling a concert there, or whatever, and claim our pressure did it, but we also know deep down no one actually cares what we think, and that Israel is far too powerful economically and politically for us to have any hope of real impact. The truth is most of us just really hate Jews and loathe the idea of Jewish sovereignty. Our real accomplishment isn’t in the metrics of celebrity visits to Israel canceled, or corporate partnerships prevented, but in creating an environment here in Berkeley, or across the US and Europe, where Jews feel threatened. That’s what happens as if my magic everywhere we do our thing. It just doesn’t have a catchy set of initials to capture it, so we go with ‘BDS’ instead. That’s a compromise we’re all willing to accept.”

Some activists have suggested rebranding with even shorter, catchier, terminology: several suggestions have emerged for various phrases whose initials spell out SS, such as Sanction the Shlomos and Sovereignty Struggle. These ideas have found little resonance among activists, most of whom view the nomenclature as a distraction from their chief mission: singling out Jewish sovereignty as a unique evil, the fight against which requires support for actions that demonstrate what happens to Jews in the absence of such sovereignty.